Putin Wants to Rewrite the End of the Cold War 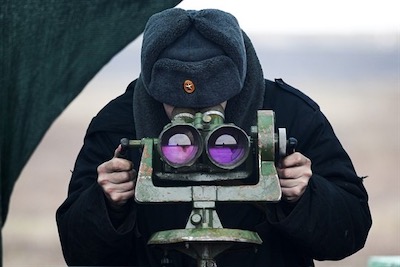 A Russian soldier looks through a binocular during drills in the Rostov region in southern Russia, Dec. 14, 2021 (AP)

When the Soviet Union collapsed three decades ago, the European security architecture suddenly became uncertain, its future put in play. After all, much of the postwar balance of power in Europe—and the world—had rested on the icy pillars of the Cold War, pillars that in 1991 abruptly melted. It didn’t take long, however, before the euphoria of freedom in the former Soviet bloc was translated into a series of diplomatic agreements enshrining a vision of cooperation, democracy and respect for independent states.

With tens of thousands of Russian forces now massed near the Russia-Ukraine border and Putin making impossible demands on the West, the agreements of the 1990s offer a stark reminder of how mistaken the expectations of those years proved to be, and how unreliable Putin is in keeping his country’s commitments.

Having already annexed Crimea and invaded eastern Ukraine, Putin is now claiming that Kyiv’s very efforts to defend itself justify Russian aggression. His maximalist demands include that NATO not only bar Ukraine from joining the alliance, but also commit to refrain from expanding eastward, regardless of the wishes of independent countries—wishes Russia had vowed to respect. Crucially, Putin is also demanding that NATO essentially not help Russia’s neighbors defend themselves from a demonstrably aggressive Moscow, calling, for example, the positioning of missile defense systems on Ukrainian soil a red line.

It’s a head-spinning shift from lofty ideals that for a time looked within reach.

When the hammer and sickle was lowered for the final time from the Kremlin, Ukraine housed the world’s third-largest nuclear arsenal. In those heady days, world leaders dared to dream about permanent peace and ever-expanding democracy.

Under the Budapest Memorandum of 1994, Ukraine agreed to relinquish its nuclear weapons in exchange for security promises from Russia and the other signatories, including the United States. Moscow committed itself “to respect the independence and sovereignty and the existing borders of Ukraine.” The U.S. and the U.K., for their part, vowed to “seek immediate United Nations Security Council action to provide assistance to Ukraine” in case “Ukraine should become a victim of aggression.” Identical Budapest Memoranda were signed by Belarus and Kazakhstan, other former Soviet states that had emerged from the defunct USSR in possession of nuclear arsenals.

Ukraine held up its part of the deal, transferring thousands of strategic and tactical nuclear weapons to Russia and dismantling its vast nuclear military infrastructure.

With then-Russian President Boris Yelstin still in office, Russia and Ukraine were making strides toward building democracy in their respective countries. Embracing parallel political aspirations, Moscow and Kyiv formalized their aims to remain in each other’s good graces. In April 1997, they signed the Treaty of Friendship, Cooperation and Partnership, reiterating their respect for each other’s territorial integrity and sovereignty.

The treaty renewed automatically every 10 years, but after Russia seized Crimea in 2014, Ukraine decided to let the treaty, which had been made pointless by Russia’s actions, expire. It formally ended in 2019.

Then there was the agreement Russia signed with NATO, also in 1997, whose full name is the Founding Act on Mutual Relations, Cooperation and Security between NATO and the Russian Federation.

To read the Founding Act today is to revisit a time of hope and optimism. It is also a disheartening reminder of how Russia’s democratic promise was betrayed by its current leader, who would come to power just three years later.

One can sense the excitement in NATO’s official summary of the agreement. “The Cold War,” it declares, “has been replaced by the promise of closer cooperation among former adversaries.” The Founding Act, it explains, “is the expression of an enduring commitment … to build together a lasting and inclusive peace in the Euro-Atlantic area.” The contrast with the current acrimony could not be sharper.

The hopeful tone is similarly found in the text of the agreement, which is now being blatantly violated by Moscow.

The parties declare their intention to “build together a lasting and inclusive peace … on the principles of democracy and cooperative security.” They further agree to work together on the basis of common values and principles, including, “acknowledgement of the vital role that democracy, political pluralism, the rule of law, and respect for human and civil liberties” play in the development of prosperity and security.

They agree to “refrain from the threat or use of force against each other as well as against any other state, its sovereignty, territorial integrity or political independence.” And they agree to respect all states’ “inherent right to choose the means to ensure their own security, the inviolability of borders and people’s right of self-determination.”

By now, this all looks like a catalog of Moscow’s violations against Kyiv. Ukraine’s territorial integrity was smashed in Crimea, and Russia’s involvement in Donbass is hard to square with its commitments to both Ukraine and NATO. The demand that NATO rule out any further expansion runs against Russia’s acknowledgement in the Founding Act of every state’s right to choose the means to ensure its security.

Putin now claims his demands and his increasingly aggressive posture are a response to the West’s actions, but that is manipulative tactical rhetoric unmoored from reality. Ukraine has asked for more weaponry from NATO because of the Russian threat. That it wants to join NATO when its neighbor has swallowed part of its territory is hardly surprising.

This is far from Putin’s first attempt to distort the reality of the situation in Ukraine. In 2014, after first denying Russia’s presence in Crimea and later declaring it had no intention of annexing the territory, Putin deployed a host of rhetorical contortions to justify the seizure. He claimed he was defending the rights and wishes of Russian speakers there, and that the Ukrainian state that signed the Budapest Memorandum no longer existed after the pro-democracy Maidan revolution.

Now that Russia stands in violation of accords such as the Founding Act and the Budapest Memorandum that are still technically in effect, some have argued that it’s time for the West to declare them null and void, removing the constraints they place on NATO from protecting its most vulnerable members—meaning those closest to Russia’s borders, particularly the Baltic states. Among other provisions, the Founding Act limits the number of troops NATO can station in Eastern European member states, all of which are former Soviet republics or satellite states that joined the alliance after the USSR’s dissolution.

The collapse of the agreements signed by Moscow in the 1990s is perhaps the most dramatic evidence of the fallout from the antidemocratic wave sweeping the world, a reminder that less democracy tends to mean less peace. The euphoria of 30 years ago is now replaced by growing tensions—and the looming threat of a new war in Europe.