In Chile, the Economy’s Struggles Go Well Beyond Politics 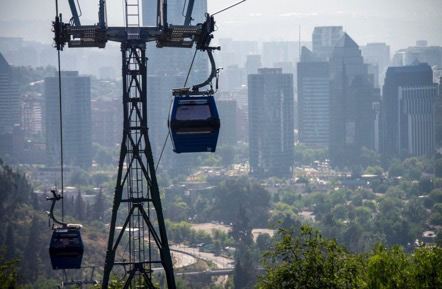 Chile's voters will head to the polls Nov. 19 to elect a new president. But no matter which candidate wins, the country's economy will continue to languish until the price of copper rises. (Martin Bernetti/AFP/Getty Images)

Conservative governments are making a comeback across Latin America after more than a decade of leftist dominance in the region. Chile could be the next in line for this transition. For the past two years, falling copper prices have slowed the country's economic growth to a crawl, drawing many voters away from the ruling center-left coalition. Though Chile's Nov. 19 presidential election is still months away, polls show that Sebastian Piñera, who previously served as president from 2010-2014 under the center-right Coalition for Change, has an early lead. (Alejandro Guillier, who is running for the center-left Radical Party, is in second place with around 17 percent of likely voters behind him, compared with Pinera's 25 percent.) But no matter which candidate wins, Chile's economy will face an obstacle far greater and more enduring than the current commodities slump: geography.

When Copper Was King

Chile, like neighboring Argentina, is isolated from the world's major markets because of its geography. The country is lodged between the Andes Mountains to its east and the vast South Pacific Ocean to its west. And for much of its political and economic development, its regional trading partners were few and far between. The Argentine and Brazilian economies, for instance, did not industrialize until the last several decades of the 20th century. Thanks to its wealth of mineral deposits, however, Chile became an important source of raw materials — particularly copper — for construction and manufacturing sectors in the United States, Europe and, more recently, Asia. These trade partnerships form the backbone of Chile's economy to this day; demand from China, Europe, and the United States combined currently accounts for around 58 percent of the country's exports. Nearly 45 percent of Chile's total exports relate to copper mining, the government's main source of export revenues.

This dependence on overseas commodity markets has put Chile at the mercy of global economic trends. The country's economy grew rapidly in the mid-2000s, as China's demand for copper surged, taking prices for the commodity with it. Between 2003 and 2013, in fact, Chile's year-on-year economic growth dipped below 3.5 percent only during the global financial crisis of 2008-2009. But now that China's own economic growth is slowing — and its voracious appetite for Chilean copper decreasing — Chile's economy has stalled. The country's economic growth fell to 1.5 percent in 2016. Although demand in the United States and the European Union will stay steady, it is unlikely to rise dramatically. Consequently, Chile's economic heyday is probably now behind it. 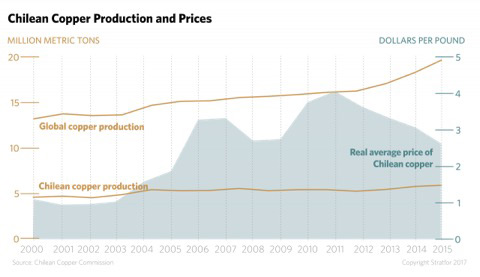 Barring a turnaround in copper prices, the country's options for reviving its economy are decidedly limited. The region lacks markets where Chile can sell its copper to offset falling demand for the commodity elsewhere. The country could try to boost its exports of goods such as fruits or fish to nearby markets, but these lower-value items won't even begin to compensate for the lost copper-related export revenues. Many of Chile's neighboring markets, moreover, are too small — or their tariff barriers too high — to fuel economic growth in the country. And though Chile has significant deposits of lithium that could provide an alternative source of income, the metal is unlikely to rival copper's prominence in the economy anytime soon.

These issues will be at the forefront of Chilean voters' minds as they head to the polls Nov. 19. But regardless of who wins the election — and what strategy the next president pursues to try to counteract the economic slowdown — the government's diminished revenues and Chile's long-standing economic policy will make it difficult to significantly increase spending. The Chilean government has been fairly conservative in its public spending over the past few decades, compared with Argentina, which has habitually spent its way into deficit by disbursing funds to regional governments as patronage. Past administrations have emphasized the importance of preserving the country's credit rating and maintaining its appeal to foreign investors. Any attempt to significantly raise domestic spending under the next administration, for instance to appease constituent groups such as student or labor unions, would conflict with the country's historical commitment to stable fiscal policy. In light of these considerations, the next president is unlikely to break with tradition and pursue higher spending, especially since the government is already running a budget deficit of around 3 percent of gross domestic product.

Chile will eventually weather the slump in copper prices, but until then, its economy will languish. In the meantime, the country's voters will cast their ballots in hopes that the new administration will find a way to usher in a new period of rapid growth. Still, it is clear that the obstacles facing Chile's economy will remain in place far beyond the next four-year presidential term.