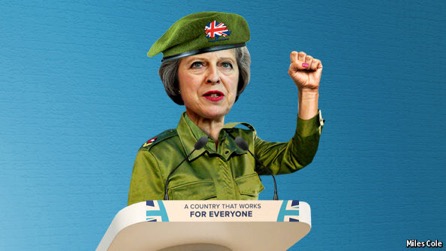 Mainstream politicos in Britain have long held these truths to be self evident. The left won the social battles of the past decades. The right won the economic ones. The resulting consensus combines free-market liberalism with broadly permissive cultural instincts. But on October 5th Theresa May strode up to the podium at the Conservative Party conference, awkwardly waved at the crowd, cleared her throat and unceremoniously drove a bulldozer through those assumptions.

Mrs May began with a short tribute to David Cameron. Her predecessor had presided over rising employment, improving schools and falling crime, she noted, before adding: “But now we need to change again.” And then came the tornado. Britain’s vote to leave the EU in June was about much more than Brexit. It was a “quiet revolution”, a “turning point”, a “once in a generation” revolt by millions of ignored citizens sick of immigration, sick of footloose elites, sick of the laissez-faire consensus. “A change has got to come,” she said, four times.

The nation state is back: “Time to reject the ideological templates provided by the socialist left and the libertarian right and to embrace a new centre ground in which government steps up,” Mrs May declared. So borders will be strengthened, foreign workers kept out, patriotism respected, order and discipline imposed, belonging and rootedness enshrined. “If you believe you’re a citizen of the world, you’re a citizen of nowhere. You don’t understand what the very word citizenship means,” she said.

On the economy, the Conservatives are moving left. Parts of Mrs May’s speech recalled Ed Miliband, Labour’s previous leader, whose market interventionism earned him an anti-business reputation. She went on about bosses who do not look after their staff, companies that do not pay enough tax and utility firms that rip off consumers (even hinting at the sort of meddling in energy markets that won Mr Miliband particular barbs). Her government, she said, would identify the industries that are of “strategic value to our economy” and boost them “through policies on trade, tax, infrastructure, skills, training, and research and development.” At one point she even questioned the independent Bank of England’s low interest rates.

Socially, meanwhile, Mrs May is taking her party rightward and at moments sounded more like Nigel Farage, the doyen of the populist UK Independence Party. She took aim at liberal politicians and commentators who “find your patriotism distasteful, your concerns about immigration parochial, your views about crime illiberal” and “left wing, activist human-rights lawyers”. Companies will be made to declare how many of their staff are foreigners, to shame those who do not hire natives.

It remains to be seen precisely what will come of all this. The almost comically small-bore policies announced so far—including cadet forces in two-dozen state schools and a review into labour conditions—hardly correspond to the daring rhetoric. Every new prime minister since Thatcher has arrived in office promising to revive manufacturing, lubricate social mobility and do more for hacked-off, hard-pressed strivers. Still, the sheer intellectual swagger of its authoritarianism sets Mrs May’s speech apart. It is worrying: a systematic rejection of the way the country has been governed, for worse and mostly better, for decades. Like it or not, Britain’s strengths are its open, flexible, mostly urban service economy and its uncommonly mobile and international workforce. That fact cannot simply be wished or legislated away.

Mrs May makes it clear that liberal London should not take precedence over post-industrial areas. Yet the citizens of that great deracinated, metrosexual Babylon pay more in work taxes than do those of the next 36 cities combined. Brexit, it is true, was partly a vote against the aloofness of the capital and its arrogant captains of finance. But it was not a vote for a poorer country, higher unemployment or shabbier public services. The prime minister’s speech does not fill Bagehot with confidence about her ability, or even willingness, to find the right balance as she sets the country’s post-Brexit course.

Yet it will resonate with the public and may propel the Tories to a landslide at the next election. Its premise—that the vote for Brexit was a revolt against globalisation—was sound. Touring pro-Leave events during the referendum campaign, Bagehot heard again and again that the cards were stacked in favour of fat cats and foreigners. One can disapprove of Mrs May’s prospectus without denying that it speaks to these concerns, and to the pathology that has emerged with each recent tale of elite complacency, corporate malfeasance and political corruption; from the MPs’ expenses scandal of 2009 to the shoddy treatment of workers at BHS, a collapsed retail giant, this spring.

So it is not enough for liberals to shake their heads at Mrs May’s populism. They have to grapple with the reasons for its appeal. Areas with fast-rising migrant populations do not receive corresponding resources fast enough. The country’s infrastructure is patchy, the health service is at breaking point and jobs are plentiful but low-paying. It is not illiberal to recognise that London and the rest of Britain can feel like different countries.

Those who resent the prime minister’s protectionist, authoritarian gloom must, then, do more than hyperventilate and pearl-clutch. They should cheer Mrs May when she gets things right; perhaps on house-building, where her government has declared war on NIMBYs who oppose new construction projects. And when they disagree, they should come up with better solutions: better ways to reform corporate governance, increase competition, improve public services and adapt the workforce to change. No one can accuse the prime minister of being vague about the course she wants Britain to take. At the very least, opponents must rise to the same standard—and offer an alternative.