The Achilles Heel of Putin’s Regime 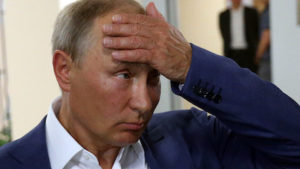 Russian President Vladimir Putin’s authority is weaker than it seems. In fact, the bedrock of Putin’s power – the clientelist economic arrangements that he has assiduously consolidated over the past generation – has become the main threat to his political survival. The reason is simple: the lack of credible property rights under Putin’s system of crony capitalism forces senior Russian officials and oligarchs to hold their money abroad, largely within the jurisdictions of the Western governments against which Putin rails.

With the help of carefully selected loyalists, Putin has established three circles of power: the state, state-owned corporations, and loyalists’ “private” companies. The process began during his tenure as chairman of the Federal Security Service, from 1998 to 1999, when he wielded control over the secret police.

But it was Putin’s first term as president, from 2000 to 2004, that amounts to a true masterpiece of power consolidation by a budding authoritarian. First, in the summer of 2000, he took charge of Russian television. Next, he established his “vertical of power” over the state administration and the regional administrations, as well as his “dictatorship of law” over the judicial system. And then, in the 2003 parliamentary election, Putin gained solid control over both the State Duma (the lower house) and the Federation Council (the upper house) of the Russian legislature. At the pinnacle of state power, the Security Council, he installed three KGB generals: Sergei Ivanov, Nikolai Patrushev, and Aleksandr Bortnikov.

To strengthen the second circle of his power, Putin seized control over the state corporations one by one, beginning with Gazprom in May 2001, by appointing loyalists as chief executives and chairmen. The three top managers of state-owned companies are Igor Sechin of Rosneft, Aleksei Miller of Gazprom, and Sergei Chemezov of Rostec.

Putin clinched his authority over the state sector in 2007, during his second term, with the creation of vast corporations that have since expanded substantially, with cheap state funding, often securing monopolies in their industries. Because these companies are treated as a source of power and rents, rather than of economic growth, they are peculiarly disinterested in competition, innovation, entrepreneurship, and productivity. The only relevant standard of corporate governance is loyalty to Putin.

Then there is the third circle of power, comprising Putin’s most powerful cronies – the top four appear to be Gennady Timchenko, Arkady Rotenberg, Yuri Kovalchuk, and Nikolai Shamalov – and their companies. Their behavior is usually viewed as kleptocratic, though Putin has used his legislative authority to ensure that many of their dubious activities are technically legal. For example, cronies are entitled to buy assets from state companies at discretionary prices and fill government procurement orders with no competition.

The system Putin has created is strikingly similar to the czarist system that prevailed until the “Great Reforms” of the 1860s. Indeed, Putin is often called a new czar, because his power is legally unlimited (though his preoccupation with opinion polls shows that public sentiment does matter). Rather than promoting institutional development, he has pursued far-reaching deinstitutionalization, aimed at concentrating executive, legislative, and judicial powers in his own hands.

But in the absence of credible property rights, wealthy Russians, including Putin’s own cronies, know that the only safe places to keep their assets are abroad. And, thanks to a fully convertible ruble and the absence of restrictions on capital outflows, they can transfer their gains to offshore tax havens.

This has naturally created a fourth circle of power, over which Putin has no control: the offshore tax havens themselves. And those havens are no longer as secure as they once were.

With the Financial Action Task Force having reduced bank secrecy in Switzerland and cleaned up the many small island tax havens, there are two major remaining destinations: the United States and the United Kingdom, both of which permit anonymous currency inflows and allow asset owners to hide their identity. In the US, tens of billions of dollars move through law firms’ opaque bank accounts each year, facilitating money laundering.

In general, Western governments do not really exert much control over such activities within their borders. In fact, while the assets of Putin’s cronies in the US and the European Union are supposed to be frozen, according to the sanctions imposed after Russia’s illegal annexation of Crimea in 2014, hardly any have been found.

It is time to change this, by initiating comprehensive investigations into the assets of sanctioned people. The US and the UK, which presumably hold the vast majority of Russian offshore wealth, must also catch up with their counterparts in most of Europe by prohibiting the anonymity of beneficiary owners. The US should also proscribe the use of attorney-client privilege to transfer anonymous or dirty money into the country.

The good news is that progress may be on the horizon. A new bill, which US President Donald Trump signed into law on August 2, calls for far-reaching investigations into “senior foreign political figures and oligarchs in the Russian Federation” – including “spouses, children, parents, and siblings” – and their assets within 180 days.

As the veteran liberal Russian politician Leonid Gozman points out, “To judge from the statements of our propagandists, the Russian state is very valuable,” but it is also “a very fragile construct that can be destroyed by anything,” from the fight against corruption to efforts to oust kleptocratic officials. Given the vast stocks of Russian capital that have piled up in New York, London, and elsewhere, the West is ideally positioned to exploit this fragility.