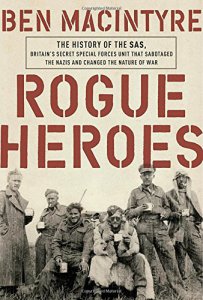 “The commandos were intended to be Britain’s storm troops, volunteers selected and trained to carry out destructive raids against Axis targets.”

No Allied commando unit in World War Two could match the record of Britain’s Special Air Service. In just three years, the elite outfit carried out nearly 50 missions behind enemy lines, eliminating more than 7,700 Axis personnel and while taking an estimated 23,000 prisoners. Ben MacIntyre’s latest book, Rogue Heroes, explores the SAS’ secret war in North Africa, the Mediterranean and Europe. In the following excerpt, provided by our friends at Penguin Random House, the noted journalist and historian describes how the famous unit came into being in the most unlikely of places: the recovery ward in a North African army hospital.

A tall, thin soldier lay, grumpy and immobile, in a Cairo hospital bed. The 25-year-old officer had been brought into the Scottish Military Hospital on June 15, 1941, paralyzed from the waist down. A letter to his mother from the War Office stated that he had suffered “a contusion of the back as a result of enemy action.”

This was not, strictly speaking, true. The injured soldier had not set eyes on the enemy: he had jumped out of a plane, without a helmet or proper training, ripped his parachute on the tail and plummeted to earth at roughly twice the recommended speed. The impact had knocked him out and badly injured his spine, leaving him temporarily blinded and without feeling in his legs. The doctors feared he would never walk again.

Even before his parachuting accident, the officer’s contribution to the war effort had been minimal: he lacked the most basic military discipline, could not march straight, and was so lazy his comrades had nicknamed him “the Giant Sloth.” Since being posted to Egypt with the British commando force, he had spent much of his time in Cairo’s bars and clubs, or gambling at the racecourse. The nurses at the hospital knew him well, for he frequently popped in during the morning, whey-faced and liverish, to request a blast from the oxygen bottle to cure his hangover. Before his parachute jump landed him in the hospital, he had been under investigation to establish whether he was malingering and ought to be court-martialed. His fellow officers found him charming and entertaining; his senior commanders, for the most part, regarded him as impertinent, incompetent, and profoundly irritating. On completing officer training, he had received a blunt appraisal: “irresponsible and unremarkable.” 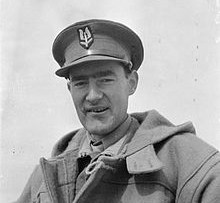 Lieutenant David Stirling of the Scots Guards was not a conventional soldier.

The writer Evelyn Waugh, a fellow officer in the commando force, came to visit Stirling about three weeks after his admission to the hospital. Waugh had been misinformed by the matron that one of Stirling’s legs had already been amputated, and he would likely lose the other. “I can’t feel a thing,” Stirling told his friend. Embarrassed, as Englishmen tend to be when faced with disability, Waugh kept up a steady stream of meaningless small talk, perched on the edge of the bed, and studiously avoided the subject of his friend’s paralysis. Every so often, however, he would sneak a surreptitious glance to where Stirling’s remaining leg ought to be, and whenever he did so Stirling, with extreme effort, would wiggle the big toe of his right foot. Finally, Waugh realized he was being teased, and hit Stirling with a pillow.

“You bastard, Stirling, when did it happen?”

“Minutes before you came. It takes a bit of effort, but it’s a start.”

Stirling was regaining the use of his legs. Others might have cried for joy; for Stirling, however, the first sign of his recovery was an excellent opportunity to play a practical joke on one of Britain’s greatest novelists.

It would take two more weeks before Stirling could stand upright, and several more before he was able to hobble about. But during those two months of enforced inaction he did a great deal of thinking—something that, in spite of his reputation as a feckless gadabout, he was rather good at.

The commandos were intended to be Britain’s storm troops, volunteers selected and trained to carry out destructive raids against Axis targets. Prime Minister Winston Churchill had decided that the ideal theatre in which to deploy the commandos would be North Africa, where they could conduct seaborne raids against enemy bases along the Mediterranean coast. 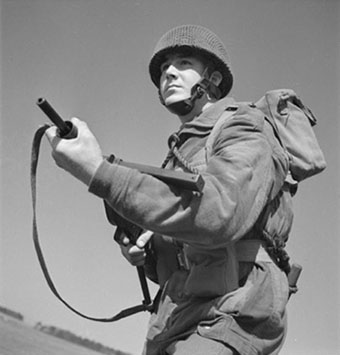 In Stirling’s unsolicited opinion, the concept was not working. Most of the time the commandos were inactive, awaiting the order for a great assault that never came; on the rare occasions when they were deployed, the results had been disappointing. The German and Italian troops fully expected to be attacked from the sea, and were primed and waiting. The commando forces were simply too large and cumbersome to launch an assault without being spotted; the element of surprise was immediately lost.

But what, wondered Stirling, if the combat troops attacked from the opposite direction? To the south, stretching between Egypt and Libya, lay the Great Sand Sea, a vast, waterless expanse of unbroken dunes covering forty-five thousand square miles. One of the most inhospitable environments on earth, the desert was considered by the Germans to be virtually impassable, a natural barrier, and they therefore left it largely unprotected, and entirely unpatrolled. “This was one sea the Hun was not watching,” Stirling reflected. If mobile teams of highly trained men, under cover of darkness, could be infiltrated onto the enemy’s desert flank, they might be able to sabotage airfields, supply depots, communications links, railways, and roads, and then slip back into the embracing emptiness of the sand sea. A commando force several hundred strong could attack only one target at a time; but a number of smaller units, moving quickly, raiding suddenly and then retreating swiftly, could destroy multiple targets simultaneously. The opportunity to attack the enemy in the rear, when he least expects it, is the pipe dream of every general. The peculiar geography of North Africa offered just such a possibility, reflected Stirling, as he lay half paralyzed in his hospital bed, trying to wiggle his toes.

Stirling’s idea was the result of wishful thinking more than expertise; it had emerged not from long hours of reflection and study, but from the acute boredom of convalescence. It was based on intuition, imagination, and self-confidence, of which Stirling had plenty, rather than experience of desert warfare, of which he had none. But it was an inspired idea, and the sort of idea that could only have occurred to someone as strange and remarkable as Archibald David Stirling.