Tyranny in the 20th Century 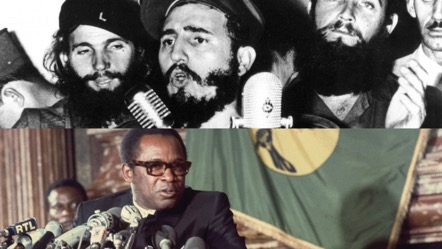 Cuba's Fidel Castro (top) and the Congo's Mobutu Sese Seko (bottom) are just two of the many dictators to arise in Latin America and Africa during the 20th century. (Keystone/Hulton Archive/Getty Images)

Africa and Latin America have vastly different politics, religions and social customs, but when it comes to geography they are actually quite similar. In the 20th century, striking likenesses in both regions' terrain — which is dominated by impenetrable rainforests, highlands and harsh deserts — gave rise to yet another similarity between them: the rise of dictators. The nature of these authoritarian governments varied widely, however, as other factors shaped their circumstances and success.

Isolation stemming from Africa and Latin America's inhospitable terrain has defined the politics, societies and economies of each region. In Latin America, for example, topographical barriers such as the Darien Gap (Panama), the Chihuahuan and Sonoran deserts (Mexico) and the cross-border Andes Mountains and Amazon rainforest have historically prevented its political cohesion. During colonial times, the Spanish struggled to maintain their colonies, separated as they were from one another. Later, independence movements had equal difficulty unifying the region. Africa has experienced similar problems with regionalism. It boasts approximately 14 major agro-ecological zones, including the Congo Basin; the Sahel, Sahara and southern Kalahari deserts; and the Niger Basin. These zones act as natural political, religious and tribal boundaries that have shaped the political dynamics of the massive continent. 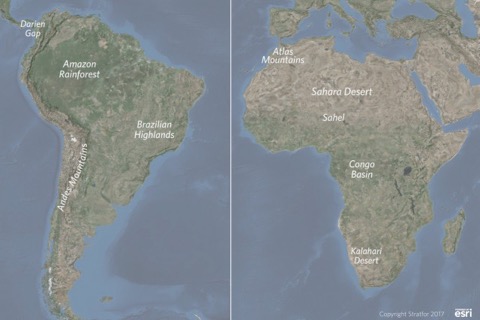 By the 20th century, Africa and Latin America contained many isolated regions and states ripe for the taking by local strongmen. But the kind of authoritarianism that arose in each was distinct, because although geography contributes to the emergence of dictatorships, it is not the only thing that spurs their creation. Instead an array of factors, including institutional structure and personal motivation, first drove African and Latin American dictators to grab and hold onto power.

After World War II, Latin America became polarized as many of its leaders sided with the United States or the Soviet Union and solidified their own power against their political opponents. But regardless of which alliance they joined, Latin American dictators ruled based on their personalities. And those personalities, in turn, were shaped by characteristics of their regions that were largely determined by geography.

To understand Fidel Castro, it is important to understand the personal grievances and motives that encouraged him to enter Cuban politics. But it is more important to understand the state Cuba was in following the Spanish-American War. In 1902, after waging asymmetrical warfare against the Spanish for roughly 30 years, the United States allowed Cuba to govern itself as long as Washington was permitted to intervene in foreign and economic affairs when its interests were at stake. Just four years later, Washington stepped in to save Cuban President Tomas Estrada Palma from an attempted coup, marking the beginning of a consistent pattern. Between 1908 and 1958, the United States intervened in Cuban affairs so many times that some historians argue Cuba again became a de facto colony of the United States. Cubans resented what they perceived to be U.S. paternalism at best, and U.S. imperialism at worst. This resentment fed Cuban nationalism, which inspired Castro to become a politician and later supported his political ambitions.

In 1952, Fulgencio Batista seized power in a coup that many, including Castro, thought the United States was too quick to support. Soon after, Castro — convinced that only a revolution would right the situation — took to the country's Sierra Maestra Mountains, where he fought to topple Batista's government. By 1959, Castro had prevailed, and he turned his attention to the logistics of ruling the tiny island nation. He eventually reached out to the Soviet Union, using his alliance with the Soviets and proximity to the United States to inflate Cuba's international standing.

The United States, unsurprisingly, was not happy with this arrangement and made numerous attempts to topple Castro. Washington staged the infamous Bay of Pigs invasion and constructed elaborate assassination plots, but to no avail. The effort only increased Castro's animosity toward the United States and provided fodder for left-wing movements across Latin America and Africa, proving to the Soviet Union that Cuba was a crucial ally in spite of its small size. Meanwhile, U.S. plots against Castro fueled his acute paranoia, which eventually led him to take control of every aspect of Cuban society. With the death of Castro in 2016, Cuba embarked on a significant political transition. But Castro's legacy is still evident in many ways, including in the country's security apparatus, which continues to wield significant power over the island.

President General Alfredo Stroessner of Paraguay saluting during a visit to Spain in July, 1973.

Far from Cuba, deep in the heart of South America, Paraguay rests between Brazil's savannah forests and Argentina's northern plains. During the late 19th century, Uruguay, Brazil and Argentina teamed up against Paraguay in the War of the Triple Alliance, the bloodiest war ever to be fought in the Americas. Paraguay, defeated and distrustful of its neighbors, turned inward until 1932, when it fought the three-year Chaco War with Bolivia. It was during this war, and particularly the Battle of Boqueron, that the young Alfredo Stroessner made a name for himself as a volunteer artillery cadet. At the age of 36, Stroessner became one of the youngest men in Paraguay to be promoted to brigadier general. In 1954, he ousted Paraguay's civilian president in a military coup.

History was on Stroessner's side. The United States, watching the spread of communism in Latin America with growing concern, was searching for a staunch ally in the region to host its logistics and intelligence platforms. Paraguay's location at the heart of the Southern Cone fit Washington's needs perfectly, and throughout Stroessner's 35-year rule, Paraguay pursued a foreign policy that supported the United States in its competition with the Soviet Union. This eventually culminated in Operation Condor, which united the right-wing military governments of Argentina, Chile, Brazil, Paraguay and Uruguay against the Soviets. As the Cold War came to a close, however, Stroessner was ousted by Gen. Andres Rodriguez and forced into exile in Brazil. He died in Brasilia in 2006.

The Cold War's reach extended into Africa as well. In the 1950s, a wave of independence movements swept across the continent, installing many strongmen as heads of state. But these leaders could not escape the bigger political battles being waged between East and West. Some were able to deftly navigate the rivalry between Washington and Moscow, placing the contest between capitalism and communism in the African context, but others became pawns in a game that was largely out of their control.

Setting the Example in the Congo

President Mobutu Sese Seko during an official visit to Paris in May, 1978. (Hulton Archive/Getty Images)

It is difficult to point to any single African dictator as "typical," given the many complex differences among African countries. That said, Mobutu Sese Seko — the president of the Democratic Republic of the Congo (formerly known as Zaire) — may be the most emblematic of Africa's 20th-century strongmen. When Belgium hastily pulled out of the Congo in 1960, the country was ill-prepared for independence. Amid a dearth of university graduates and adequate infrastructure, instability quickly broke out as a secessionist movement backed by Belgian mining interests took root in Katanga province, located more than 2,317 kilometers (1,440 miles) from the capital of Kinshasa.

The Congo's vast and mostly ungoverned territory almost necessitated an authoritarian government, but in the end, Cold War interests were what ensured one. The Soviet Union quickly focused its attention on the Congo, believing it could build a chain of African allies by gaining a foothold in the country. Moreover, the Congo had massive deposits of cobalt, which was critical to weapons development at the time, and it was strategically positioned in the center of Africa. The Soviets hoped that they could start in the Congo and expand their influence north, outflanking NATO in Western Europe by eventually controlling the Mediterranean Sea through North Africa. But the United States did not sit idly by. It poured considerable resources into backing Mobutu, who rose through the military ranks to become chief of staff of the Congolese army and, eventually, head of state. As he did, he amassed a sizable fortune for himself and his inner circle of supporters.

In addition to using the Cold War competition to his advantage, Mobutu leveraged tribal loyalties and divisions to strengthen his hold on power. Through these negotiations and a good amount of corruption, Mobutu was able to foster and preside over a strong patronage network. But the practice eventually led to his downfall. Members of Mobutu's Ngbandi tribe were crucial to most of his informal patronage networks and made up the bulk of his personal security force. When U.S. cash flows dried up in the 1990s, Mobutu's government found itself with many enemies and few resources. In time, rebel leader Laurent Kabila, backed by an alliance of regional actors that included Uganda and Rwanda, successfully dislodged the ailing Mobutu. He fled the country, never to return.

Uganda, a landlocked country northeast of the Congo, also has a history of being ruled by strongmen. Uganda generally has had disproportionate influence in the Great Lakes region and in East Africa, thanks in part to its fortuitous location on the fertile highlands surrounding Lake Victoria. But it also proves that even favorable geography cannot save a poorly governed state from an authoritarian fate. And governing Uganda — one of the most ethnically diverse countries in the world — is certainly no easy task.

By the late 1960s, Uganda's first president, Milton Obote, had begun to worry that the opposition was planning to unseat him. He began to carry out excessive crackdowns on the country's dissidents, real or imagined. The commander of the Ugandan armed forces, Idi Amin, capitalized on the fear Obote's purges generated and led a successful coup against him in 1971. Almost immediately, Amin sought to manage the complex tribal landscape by engaging in massive ethnic cleansing, crushing political dissent and removing supporters of the Obote government, especially those from the northern Acholi and Lango ethnic groups. Amin's administration also expelled some 35,000 nationals of Asian descent who immigrated to Uganda while it was under British rule, expropriating their businesses and holdings in what it called an economic war.

At the same time, Amin exchanged Uganda's strong ties with Britain and Israel for an alliance with Libya, the Soviet Union and East Germany. Though the abrupt shift had little effect on Amin's domestic power base, it eventually contributed to his ruin as Uganda's foreign support network crumbled. Amin's harsh tactics at home similarly backfired: Many of those persecuted under Amin fled to nearby Tanzania, where they organized against the increasingly brutal Ugandan leader. Amin declared war on Tanzania, arguing that the Kagera region rightfully belonged to Uganda. However, the move prompted Tanzania to funnel more resources to Ugandan exiles amassing against Amin. They successfully overthrew him in 1979, forcing him to flee to Saudi Arabia, where he died in 2003.

So Close, Yet So Far

Many 20th-century dictators in Africa and Latin America came from military backgrounds and used the political dynamics of the Cold War as a means to their own ends. But they were also very different in several key ways. Latin American dictators tended to rely on class ideology and warfare to rally their support bases. By comparison, political tribal identities played a more important role in the way African dictators won loyalty and established patronage networks. In both regions, permanent geographic realities helped to create the environment needed for authoritarianism to thrive, an environment the Cold War only nurtured even more. In many ways, both regions' strongmen were products of their time and place, even if the legacies of some, such as Cuba's Castro, have survived longer than others. Yet even where dictatorships have died out, the geopolitical realities of Latin America and Africa will ensure that authoritarianism continues to pose a persistent — if hidden — threat.