How Secure Is Maduro After Venezuela’s Sham Election? 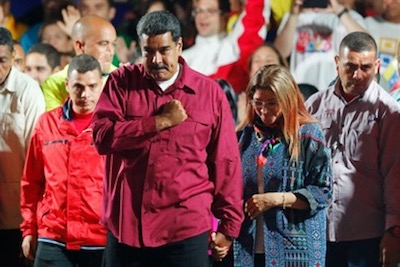 There was never any doubt about who would win Sunday’s presidential election in Venezuela. The lead-up was so patently undemocratic that even before the vote took place, the results were rejected as illegitimate by a large number of countries, including the United States, Canada, the entire European Union and a dozen of Venezuela’s neighbors in Latin America. That, however, was hardly the end of the challenge for the international community and, more crucially, for Latin American countries growing more worried about the impact of Venezuela’s social and economic collapse on them.

The aftermath of the election has unleashed a torrent of diplomatic activity in the region as a bloc of Latin American countries ponder the daunting question of how to help the beleaguered Venezuelan people dislodge a government that has brought a multiplicity of maladies—from scarcity of every conceivable consumer product, including food and medicines, to rampant crime, economic depression and epic levels of inflation.

In the early days of socialist rule in Venezuela, when Hugo Chavez electrified Latin America’s left with his “21st-century socialism,” many in the Americas viewed Chavismo as a threat to the status quo. He inspired leftist leaders who started taking power in democratic elections, and he backed Colombia’s Marxist guerrillas who were still trying to topple the government. But Venezuela’s socialist experiment has turned into a spectacular disaster, propelling the retreat of Latin America’s so-called pink tide.

If anything, Venezuela is a cautionary tale. Now, with more than a million refugees fleeing the country, Venezuela has spawned a series of humanitarian emergencies across the region. From Colombia to Chile, governments are trying to find a way to reverse Venezuela’s decline and stem the human surge across their own borders.

Immediately after the election, the Lima Group, a 14-nation bloc of Central and South American countries that also includes Canada, denounced the vote and announced plans to recall their ambassadors and downgrade diplomatic relations. They vowed to work on blocking international financial support for the Maduro regime unless money is directly targeted for humanitarian aid.

The United States also rejected the results. On Monday, President Donald Trump signed an executive order banning vital financial transactions. Yet the order did not prohibit the purchase of Venezuelan crude oil, the regime’s lifeline.

Trump had shocked Latin American leaders last year when he suggested that the U.S. had a “possible military option, if necessary” in Venezuela. The last thing the region wants is U.S. boots on the ground carrying out a coup. But Lima Group leaders are working with Washington.

Their strategy now seems to be a delicate balancing act, tempering Trump’s most aggressive impulses while leveraging America’s considerable diplomatic and economic power. The plan is to diplomatically isolate and financially squeeze the regime until it agrees to enact democratic reforms, collapses or is toppled from within.

In order to bring that about, Maduro’s foes in Latin America, the U.S. and elsewhere need to convince the international community to help with economic sanctions. It’s a tall order, but not an insurmountable one.

U.S. officials said they are having “pointed discussions” with Russia and China on the subject of loans to Venezuela. Both countries reacted coolly to the overtures, but they did not exactly embrace Maduro, either. China said it would not interferein Venezuela’s domestic affairs and is confident that Venezuelans can resolve their disputes. But Beijing did not congratulate Maduro on his dubious re-election. Russia denounced the countries that rejected the election results, arguing that they set a “dangerous precedent.”

Maduro thanked Russian President Vladimir Putin, in a Twitter post, for “recognizing our triumph.” That’s not exactly what Putin did, though. The Kremlin said Putin “wished Maduro good health and success in resolving the social and economic issues facing the country.”

If Russia and China don’t join in sidelining Maduro, the regime could last for a very long time. For obvious reasons, China is generally averse to international actions to dislodge regimes on the grounds that they are undemocratic. The same is true of Putin, who has no interest in seeing a friendly Venezuelan regime replaced by a pro-Washington one.

Yet Beijing and Moscow are hesitating about continuing to bankroll Caracas as the Venezuelan economy falls deeper into the abyss. For years, when Chavez was president, Beijing became Caracas’ primary lender. When the economy started tanking, Beijing stepped back and Moscow moved in. The oil giant Rosneft, half of which belongs to the Russian state, has been investing heavily in Venezuela. In 2016, Rosneft acquired over 49 percent of Citgo—the Venezuelan-owned, U.S.-based refiner—as collateral for a $1.5 billion loan to Venezuela’s state oil company, PDVSA, and has since continued to expand its presence in the country.

Beyond geopolitical considerations, Venezuela is looking more like a bad bet for Russia and China. The economy has shrunk by about 40 percent in the past four years. Oil output—the only source of significant hard currency for the regime—is plummeting largely due to mismanagement. It fell by about a third last year.

As the economy spirals downward, the government is creaking under the weight of some $150 billion in foreign debt. Reserves are dwindling fast. Venezuela owes China an estimated $28 billion. Beijing has apparently already decided to stop throwing good money after bad. Russia’s debt is smaller, about $8 billion, but Putin has economic concerns of his own.

Even if Beijing and Moscow stop helping Maduro, the Venezuelan regime still has massive amounts of oil—the world’s largest proven reserves. That is a considerable tool for survival. In recent overtures to India, Venezuela said it could deal in rupees and sell oil to buy Indian food and other goods. Other countries have survived harsh economic embargoes. Cuba has endured more than half a century of restrictions.

Venezuela’s Latin American critics are hoping that the deeply unpopular regime is standing on an increasingly fragile foundation. With Venezuelans waiting in long lines for scarce food and dying of preventable illnesses, Maduro’s main concern has to be maintaining the standard of living of military leaders and key political figures. Without it he will not survive. The talk in the region is that Venezuela’s military is growing restless.

The hope among Maduro’s critics is that last Sunday’s election will be the last one he steals.