‘Putin was not so much seeking to start a new arms race abroad, as trying to keep alive an old myth at home.’ Alexander Zemlianichenko/AP

Vladimir Putin gave his annual state of the nation address on Thursday. It began with promises of a bright future, in which life expectancy has risen, poverty levels are halved and GDP grows by 50% by 2025. Two-thirds of the way through, though, Putin turned it into a belligerent ode to Russian military technology and a challenge to the US. Putin was not so much seeking to start a new arms race abroad, as trying to keep alive an old myth at home about a Russia whose firepower was its only source of international traction and security.

As he stood in front of video screens showing clunky simulations of one missile after another, Putin looked like a salesman of Armageddon. There was the Sarmat heavy intercontinental ballistic missile, with its 15 nuclear warheads and its hypersonic cousin, the Avangard. The Status-6 drone torpedo that could carry a nuclear payload of its own. Truck-mounted lasers, and the Kinzhal super-fast air-launched missile. Perhaps most surreal, along with the announcement of a planned nuclear-powered cruise missile that could dodge interceptors and fly around the world, came a public contest to name it. I think we can safely assume it won’t end up being called Nukey McNukeface.

This all sounds impressive, terrifying even, but should not be taken entirely at face value. Russian defence industries have a pretty poor track record in delivering advanced systems. Development of the new Bulava submarine-based missile, for example, began in 1998, but it suffered a whole series of embarrassing failures. Last year, it finally scored two successful tests, but questions remain about its reliability. Likewise, the Sarmat is already behind schedule, and unlikely to be fielded in 2020 as promised.

Nonetheless, this is a serious shopping list: even at a time when the overall Russian defence budget is being cut, and there are many other demands on the public purse, Putin is determined to modernise his strategic arsenal, perhaps even in ways which go against the letter or spirit of arms control treaties.

It is easy to wonder, with a snigger, quite for what Putin is (over)compensating, and it is certainly true that this was an exercise in bluster and braggadocio. The event had been moved from its usual venue, the Hall of St George in the Kremlin, to the Manezh exhibition hall, precisely to allow for massive video screens and an expanded audience. 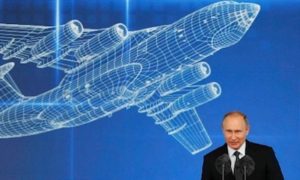 ‘Vladimir Putin’s speech doubles as his election address, just a week and a half before the polls.’ Sergei Karpukhin/ AFP/Getty Images

Putin explicitly set Russia’s strategic capabilities against the US, claiming that these new weapons could defeat anti-missile systems. This is true but misleading: Russia already can swamp them with sheer numbers, without needing new platforms. But by making this point – and with the video simulations showing missiles hitting Florida – he was explicitly harkening back to the height of the arms race.

Perhaps the most telling line, after all, was when he directly connected this armament programme with his efforts to make the world, which really means Washington, acknowledge Russia’s status as a great power: “Nobody wanted to listen to us. Well, listen to us now.”

He probably believes this: certainly his efforts to wield greater geopolitical influence than Russia’s economy or soft power would warrant do depend on force, bluff and interference abroad. But he also wants to try to take the Russian people with him. The tame audience dutifully applauded, but there is little evidence that the wider population is eager for war and empire. There is little enthusiasm for the conflicts in Donbass and Syria, and they have heard promises of more money for schools and roads too many times before.

He needs to persuade them that, in Trotsky’s possible apocryphal warning, although they may not be interested in war, war is interested in them. This speech doubles as his election address, just a week and a half before the polls. He will win, but he wants more than just acquiescence, he wants enthusiasm. As his promises of a better tomorrow sound increasingly hollow, he is having to present Russia as under political, economic, informational and even civilisational threat. These weapons are as much as anything else a restatement of Putin’s new credo: the world has become a dangerous place for Russians, they are only respected and safe when they are strong, and he is the only figure who can guarantee that.

Putin may not want a new arms race, but if that is the price of Russia being taken seriously as a great power, and selling this narrative to his people, so be it. He came across as a man who feels the tide of history washing away from him. As he fails as a statesman, peacemaker and even as nation builder, he can at least try one more role – defender of the motherland.