Russia and the West (IV): The Caucasus, a Crucible for Eurasian Powers

Where the boundaries of Europe and Asia meet, a relatively new arena has emerged in the competition between Russia and the West: the Caucasus. The region, which comprises Georgia, Azerbaijan and Armenia, rests outside mainland Europe and is surrounded by regional powers. A wave of separatist movements since the fall of the Soviet Union has played an influential role in how the Caucasus countries view Russia, which has consistently lent its support to disputed territories.

In the coming decades, the Caucasus will continue to be an important battleground for Russia and the West as other regional powers like Turkey and Iran are drawn into the competition for influence. And as Georgia, Armenia and Azerbaijan align more closely with their chosen sides, all signs point to a Western-backed alliance gaining ground.

Georgia did not become a staging ground for the Russia-West rivalry until the 18th century, well after the seeds of competition had been sowed in Ukraine and Eastern Europe. In prior centuries, the Ottoman and Persian empires ruled Kartli-Kakheti, the territory that is now Georgia. In the late 18th century, Russia formed an alliance with the Georgian state to protect the fellow Orthodox nation from the Muslim Ottomans and Persians. In 1801, Georgia was formally incorporated into the Russian Empire. When the empire collapsed in 1917, Georgia underwent a brief and unstable period of independence before subsequently being formally incorporated into the Soviet Union five years later.

Armenia, like Georgia, was a part of the Ottoman and Persian empires for hundreds of years. An Orthodox nation, it became a part of the Russian Empire in the early 20th century too, though not before its Ottoman rulers launched a mass killing of Armenians in 1915 for fear of Armenian loyalty to the Russians. This proved to be a defining moment in Armenian history, tainting its future relationship with Turkey and scattering large numbers of Armenians throughout the world. After the Russian Revolution, Armenia gained its independence for a time before joining the Soviet Union in 1922. 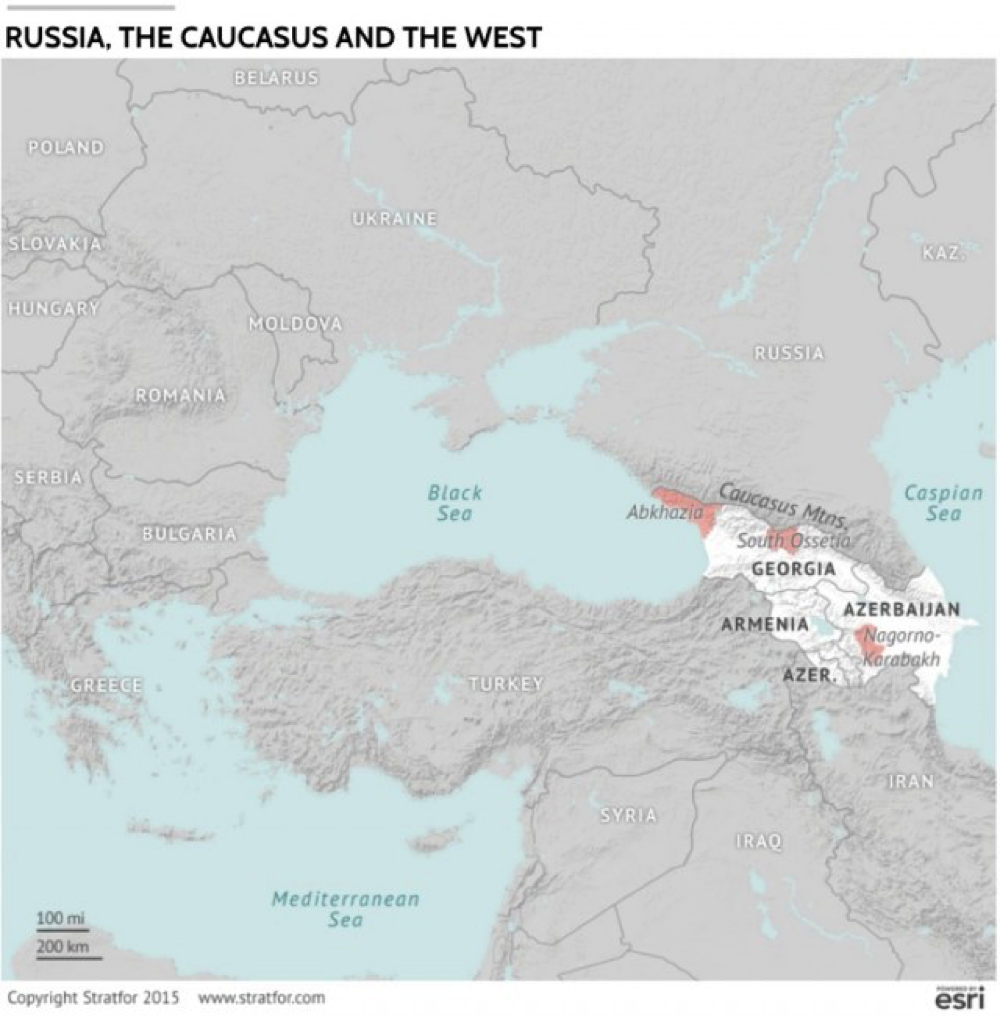 Azerbaijan followed much the same path, throwing off its long-time Ottoman and Persian rulers in 1813 only to be swept up by the Russian Empire. In the late 19th century, Azerbaijan attracted the attention of the West with its significant oil reserves. Alfred and Robert Nobel built a railway linking Baku, the capital of Azerbaijan, to Tbilisi, the capital of Georgia, as a means to transport Azerbaijani oil to the world market. By 1900, Azerbaijan had become the largest oil producer in the world. Its independence in the wake of Russia's collapse was short-lived: After a brief occupation by the British, it was swept into the newly formed Soviet Union in 1922. Though Nazi Germany attempted to seize Baku's oil fields during World War II, the Soviet army defeated the German soldiers before they could reach Azerbaijan.

The Past 25 Years: Alliances Change

In the years leading up to and immediately following the fall of the Soviet Union, each of the Caucasus countries experienced widespread instability. From the unrest arose the separatist movements that would ultimately create the breakaway territories at the heart of conflict in the Caucasus today.

Meanwhile, Armenia and Azerbaijan sparred over the territory of Nagorno-Karabakh, home to an Armenian majority but administered by Azerbaijan. During the late Soviet era, the glasnost and perestroika reforms created room for the citizens of Nagorno-Karabakh to petition to join Armenia. Yerevan supported the move, but Baku strongly opposed it. When Moscow chose not to intervene, war broke out between Armenia and Azerbaijan. With Russia's support, Armenia won the conflict, taking Nagorno-Karabakh and seven adjacent regions within Azerbaijan's territory before signing a cease-fire in 1994.

Each of these conflicts ultimately played an important role in shaping the foreign policy orientations of the Caucasus countries. In response to Russia's support for Abkhazia and South Ossetia, then-Georgian President Eduard Shevardnadze sought to counter Moscow's influence by allying with NATO and the European Union. His successor, Mikhail Saakashvili, intensified these efforts, ramping up Georgia's military and economic cooperation with the West. The country's rising tension with Russia eventually culminated in the Russo-Georgian War in August 2008. Russia defeated Georgia in five days and recognized the independence of the two breakaway territories, formalizing its military presence there in the process. Though the Georgian Dream political coalition managed to defeat Saakashvili in the 2012 parliamentary elections with its campaign of normalizing economic ties with Russia, the country has continued to strategically integrate itself with the West by pursuing NATO and EU membership. Georgia has intensified its efforts since the Ukraine crisis began in 2014, signing an EU Association Agreement in June 2014 and debuting a NATO training center in August 2015.

The fight for Nagorno-Karabakh has similarly molded Armenian and Azerbaijani loyalties. Armenia strengthened its alliance with Russia, retaining a Russian presence in Gyumri and pursuing closer economic ties by joining the Moscow-led Eurasian Economic Union. It is also a member of Russia's military alliance, the Collective Security Treaty Organization. Azerbaijan, though, chose to forego forming an alliance with Russia. Instead, it has pursued a diversified foreign policy that seeks to balance its ties with Russia, the West and Turkey. The country has used its sizable oil and natural gas resources, developed with the help of Western energy firms, to expand its energy exports in many directions, including toward Turkey, Europe, Iran and even Russia. With these newfound revenues, Baku is building up its military in the hope of someday reclaiming Nagorno-Karabakh. The current crisis in Ukraine and its political reorientation has enabled Azerbaijan to put more pressure along its line of contact with Armenia and steer negotiations with a weakened Russia in an attempt to change the frozen conflict's status quo.

The Next 25 Years: The Azerbaijan-Georgia-Turkey Axis Strengthens

The Caucasus has been one of the most dynamic fronts in the former Soviet space for the past quarter century, and the next 25 years will likely be no different. The web of relationships that defines the Caucasus — whether between the countries themselves or with external powers such as Russia, Turkey, Iran and the West — makes it probable that significant geopolitical changes lie in store for the region in the coming decades.

These changes are not confined to the Caucasus; regional powers will undergo demographic adjustments of their own. Russia, for example, is set to see a population decline of about 10 percent, falling from 143 million people to 129 million by 2050. In the meantime, the populations of Iran and Turkey will expand considerably, from 79 million to 92 million and 96 million, respectively. While Russia has nearly double the number of people that Turkey and Iran do now, the gap will appreciably narrow within the next 25-35 years. This will likely tip the economic and military balance of power in the region in Turkey's and Iran's favor. Meanwhile, Moscow's soft power will wane as the cultural links that tie the Caucasus to Russia fade away.

Over the same period, the West will remain active in the Caucasus, though how it interacts with and influences the region will change. As Europe devolves into a collection of de facto regional groupings — a new Polish-Lithuanian Commonwealth, a northern Germanic bloc and a southern Mediterranean bloc — the influence of the Continent as a whole in the Caucasus will weaken. However, countries in Central and Eastern Europe may turn to Azerbaijan as a means to diversify away from Russian energy supplies. The United States, meanwhile, will become more engaged in the Caucasus as the competition between Russia, Turkey and Iran for toeholds in the region intensifies.

Among the Caucasus countries themselves, Azerbaijan will likely be able to reclaim at least some control of Nagorno-Karabakh, whether through military action or a diplomatic settlement, within the next 25 years. Indeed, such a settlement (or at least the early stages of one) is already beginning to take shape, and the process will speed up as Azerbaijan's demographic, economic and military growth coincides with Armenia's decline. As it becomes stronger, Azerbaijan will improve its economic and military ties with Georgia and Turkey, a move that the United States will back. Meanwhile, Armenia will look to develop a closer economic and military relationship with Iran to counterbalance the Azerbaijan-Georgia-Turkey axis. In its own weakened economic and military position, Russia may have to support this move. Consequently, competing alliances between Azerbaijan, Georgia and Turkey (with selective and implicit support from the United States) on one hand and Armenia, Iran and Russia on the other will emerge in the coming decades.

Competition between the two blocs will not necessarily lead to military engagement. But given the complex network of ties in the Caucasus, several political and security tripwires will make a physical confrontation possible. For instance, the status of the region's breakaway territories will remain a source of tension, as will the weapons build-ups and military exercises of both groups. Ultimately, though, the alliance of Azerbaijan, Georgia and Turkey will prove stronger, both economically and militarily, than its Armenia-Iran-Russia rival, and with the United States' backing, it will have the upper hand in determining what shape the Caucasus' future takes.