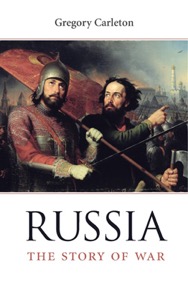 As the role Russia plays on the world stage continues to face extreme scrutiny, from the ongoing investigation into their part in the American election to international impatience with Putin’s steadfast support for Assad in Syria, it becomes increasingly important to understand how Russians themselves see their place in the world. A new book from Gregory Carleton, Russia: The Story of War, examines this through the lens of violent conflict and the centuries-old part it plays in Russian culture and self-identity. As Carleton writes, “we cannot fully understand Russia without recognizing its experience of war and the resulting stories it tells of itself. We need not condone them, but to ignore them or, as is commonplace in the West, to dismiss them as ludicrous, as the product of delusional fantasy, handicaps our ability to understand how they have profoundly shaped Russia’s self-image and worldview.” In the excerpt below, Carleton looks at the Russian experience of war and how this feeds into a self-mythologizing idea of “exceptionalism,” so strong that it has continued through massive shifts in ideology and government over centuries.

Bully. Bear. Insatiable aggressor. To many the words are inseparable from Russia itself. Wherever one looks support can be found for such epithets. The annexation of Crimea and military intervention in eastern Ukraine; the earlier flash war with Georgia and flattening of Chechen dreams for independence; the inward turn to authoritarianism and open assault on civil liberties—all push Russia onto the stage of international villainy.

The images, to be sure, enjoy little favor at home. There the titles one hears come as if from a parallel world where all is turned on its head. Allusions to Russia the defender, the protector, and even the savior or liberator permeate state media, academic tomes, religious manifestos, and popular histories. In spite of how far apart the two worldviews are, sustenance for these alter egos can be drawn from the same events and actions. The distance between the two is as unbridgeable as the values that define them. They share, perhaps, only one feature. Neither is new.

Russia has long borne this Janus-faced reputation, no matter what flag it has flown or ideology it has embraced. Its image as villain stretches back virtually unbroken for centuries. Other nations have at times taken the limelight, but none in the modern age has been such a consistent member of the cast, as if history permanently and purposefully assigned Russia that role.

War is where Russia’s contested legacy has been forged. For a millennium its lands, along with those of Belarus and Ukraine, have been among the world’s great battlefields. The scope, savagery, and frequency of conflicts that have ravaged this region are almost unprecedented. The largest armies, the biggest battles, the worst losses of life—all of these superlatives would rightfully, and tragically, point there.

As a consequence, war saturates Russian culture. Many of its churches have been built to honor its military heritage—some directly on battlefields with icons of warrior-saints adorning the walls while they continue service as the country’s heavenly guardians. Noted operas and ballets are devoted to war, while its dominance in cinema and television is unparalleled. The saturation runs so deep that Russia’s most famous writers, many of whom wore a uniform, cannot avoid the subject, whether in novel, verse, story, or essay.

Yet war has had its deepest impact on how Russia sees itself in the world. Here the quantitative factor of saturation leads to a qualitative one, arming it with the impression that its experience of war is unique. Other nations fight, die, attack, and defend, but no other, runs this belief, has faced such a persistent wave of challenges and threats for century upon century. This perceived distinction is so great that it serves as the foundation for a Russian myth of exceptionalism.

As anyone familiar with Russia knows, iterations of a special destiny have long colored its political landscape. Yet the one that derives from war is, in and of itself, exceptional because it alone bridges the ideological turns Russia has taken in modern times, from the archconservatism of the Russian Empire in the nineteenth century to the revolutionary radicalism of the Soviet Union in the twentieth. And today, in the Russian Federation, it serves as the core of a neonationalist civic religion seeking to unite all citizens around a shared belief about their unique role in history and place in the world.

Not all who over time have embraced this legacy have done it for the same purposes or in precisely the same manner. However, when it is invoked, it issues from a common stock of assumptions, operates with a consistent vocabulary, and mobilizes along an interlocking emotional appeal. At its center lies a mythic view of Russia’s history based on archetypal sets of causality, character types, scenarios, and outcomes around which remembrance of that past is structured. As this pattern repeats across genres and generations, it can downplay the profound differences that make each and every conflict sui generis and leave in their place perceived or imagined commonalities. In so doing, Russia’s wars are pushed into a single frame of reference that, as held in collective memory, fosters a distinct national identity both born and bred in war.

The story that Russian myth produces is obviously a favorable one, and it shares key features with a generic “good war” paradigm: right versus wrong, just cause, noble sacrifice. At the same time, however, because of Russia’s geographical location, its thousand-year legacy of conflict, and the unshakeable influence of Orthodox Christianity, it can take striking positions and make unsettling claims that, as it often appears to outsiders, veer off into irrational and even disconcerting directions.

Sometimes these are akin to the idiosyncrasies that mark any culture. Why should a soldier’s death be the fitting—and often expected—end to a story? What role does the Holy Mother play in Russia’s military heritage, and what is the fearsome weapon she wields? And how have Russians earned the reputation, according to a papal envoy five centuries ago, of “defending their cities and fortresses like fanatics,” oblivious to both “cold and hunger?”

Others bear far more weight, especially when projected outward. What is Russia’s response when others paint it as a predator? When does an attack or occupation become a defensive maneuver? On what grounds might a president insist that Russia has saved civilization not once, but several times? And what, ultimately, are the stakes of employing war as a cornerstone of national identity?

The answers to these and other questions take us deep into Russian history and back to the present day, yet through a mythic lens that omits nuance, recalibrates events, and generally steers us along a path of national greatness in the face of an often hostile, unforgiving world. This does not mean, however, that the narratives we find are mythological in the sense of being fantastical or made-up. They can operate within (relatively) realistic parameters by grounding themselves in actual occurrences. In this way, they express concerns, anxieties, and desires that have discernible and sometimes legitimate roots. Just as one could say about the myths favored by any nation, the history is there as much as it is not.

This conundrum demonstrates the power and attraction of myth. It allows for a degree of creative liberty that is not necessarily untrue or implausible in order to make sense of complex realities. This is how nations can always place themselves on the side of the good and come out on top even in the direst of circumstances. To this degree, the myth that gives voice to Russia’s past is no different than those heard elsewhere. What distinguishes it, however, is that it centers on war—in other words, when the stakes are greatest in the game of storytelling.

This is why myth can be so consequential, no matter its sometimes tenuous relationship to the historical record. It provides a road map to understand what is remembered, what is championed, and what is challenged or denied in a nation’s collective sense of self. It reveals the ways in which products of a given culture, from a poster to a presidential speech, gain intelligibility and acceptance at home while often producing offense or confusion for others. Through myth one can anticipate what historical connections might be drawn to shape an argument for domestic consumption, and while it does not necessarily offer the tools to foresee what actions a country might take, it does allow one to predict, with certain accuracy, how a conflict is likely to be framed—and that ability, in some circumstances, can be half the battle.