The Makings of a Caliphate 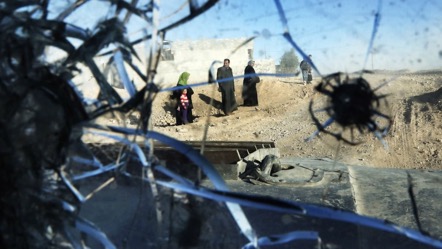 A picture taken through a vehicle's bullet-riddled windshield shows Mosul after Iraqi troops retook most of the city from the Islamic State. The group's so-called caliphate looks nothing like the caliphates of old, which thrived on diversity. (Thomas Coex/AFP/Getty Images)

At this time of year, on the crowded roads of Amman that intersect at the Fifth Circle, men in red velvet suits with white pompoms on their hats hawk "Santa" paraphernalia to drivers stuck in the rush hour snarl. Christmas trees adorn major malls. Wrapped packages dress windows, enticing passers-by to come in and buy. Though Christians make up only about 6 percent of Jordan's population, in this Muslim-majority country, signs of another religion's holiday are accepted markers of winter.

Call it tolerance. Call it appreciation. Call it capitalism. There is no prohibition on fun, diversity or commercialism in Islam. As in Judaism, the great prohibition in Islam is polytheism.

Allowance for alternate forms of worship, lifestyle and religious legislation is woven into Islamic scripture and jurisprudence. Where, then, did the horrific massacres of Muslims and people of other faiths in the Islamic State's so-called caliphate come from? The multiconfessional nature of Islamic civilization is something the Islamic State does not understand. Nor does it comprehend the broad range of social and cultural expressions that historically inhabit a caliphate. Therefore, it is important to distinguish between calling for the restoration of a caliphate and the goals of the Islamic State.

A History of Heterogeneity

Analysts searching for the meaning of the caliphate usually consider its political structure, economy, leadership and territorial conflict. Beyond its geopolitical identity, what are the historical pillars of Islamic empire? What has been the reality on the ground in terms of social structure, culture and daily life? If the Islamic State, the Taliban, al Qaeda, Boko Haram and other political perversions of Islam knew the rich cultural history of Muslim caliphates, they would run in the opposite direction.

A caliph is defined as a successor to the Prophet Mohammed, who died in 632, leaving the election of leadership in the hands of his close companions. The caliphate — a society ruled by the caliph — has been in flux ever since. Following the reign of the first four caliphs, dynasties emerged to rule an expanding empire. The Baghdad-based Abbasids took power from the Damascus-based Umayyad dynasty in 749. They ruled for over 500 years until Hulagu Khan and his Mongol armies destroyed the capital in 1258. During that time, emirates and sultanates — including surviving Umayyads who maintained a rival caliphate from Andalusia on the Iberian Peninsula from 929 to 1031 — threatened Abbasid leadership from time to time. From 909 to 1171, the Fatimid dynasty ruled from Cairo, taking on invading Crusaders from the north for nearly a century.

Shifting imperial boundaries in what we now call the Middle East are nothing new. Claims on this fertile and prosperous region that connects continents date back to Alexander the Great, 300 years B.C. As Peter Frankopan illuminates in The Silk Roads: A New History of the World, after Alexander's campaigns,

"The intellectual and theological spaces of the Silk Roads were crowded, as deities and cults, priests and local rulers jostled with each other. The stakes were high. This was a time when societies were highly receptive to explanations for everything from the mundane to the supernatural, and when faith offered solutions to a multitude of problems. The struggles between different faiths were highly political. In all these religions — whether they were Indic in origin like Hinduism, Jainism and Buddhism, or those with roots in Persia such as Zoroastrianism and Manichaeism, or those from further west such as Judaism and Christianity, and, in due course, Islam — triumph on the battlefield or at the negotiating table went hand in hand with demonstrating cultural supremacy and divine benediction. The equation was as simple as it was powerful: a society protected and favored by the right god, or gods, thrived; those promising false idols and empty promises suffered.

"There were strong incentives, therefore, for rulers to invest in the right spiritual infrastructure, such as the building of lavish places of worship. This offered a lever over internal control, allowing leaders to form a mutually strengthening relationship with the priesthood who, across all the principal religions, wielded substantial moral authority and political power. This did not mean that rulers were passive, responding to doctrines laid out by an independent class (or in some cases caste). On the contrary, determined rulers could reinforce their authority and dominance by introducing new religious practices."

Although Mustafa Kemal Ataturk officially put the kibosh on the caliphate in 1924 with the fall of the Ottoman Empire, its restoration has been an ongoing conversation among Muslim peoples searching for identity, security and self-determination in the wake of post-Word War I colonialism.

Where did it start?

During the life of the prophet in Medina, Muslims lived in community with Jews and Christians. Although there were tensions among them, each religious group was governed by its own scriptural civil and penal codes: worship and marriage, birth and death, theft and murder. Intrareligious disputes were often brought to Mohammed for arbitration. Medina was an oasis, an agricultural economy, and men and women both farmed the fields. Its large markets were renowned for produce, leather, woven baskets and blankets made and sold by women. The superintendent of the market under the second caliph, Umar, was a woman. There were schools and courts. Women owned property and inherited from their parents and husbands.

There were battles, mostly with the powerful families of Mecca bent on persecuting the nascent Muslim community that posed a threat to their pre-eminence and the profitability of their markets. The battles of Badr and Uhud mark triumph and defeat, respectively, that live in legend and allegory today. Raids on passing caravans supplemented the economy with goods and earned a reputation for fierceness. Perhaps it was not a perfect governance structure, but by and large, peace reigned in Medina until the prophet's death, at which time political rivalries began unraveling Muslim unity. Nevertheless, respect for people of other faiths, particularly within the Abrahamic tradition, remained.

Historically, the great Muslim-administered civilizations contained populations that varied linguistically, culturally and religiously. From the Iberian Peninsula to the Malay Peninsula, from the outskirts of Vienna to the outlying islands of Indonesia, heterogeneity prevailed even if equality did not. Taxes were higher on non-Muslims in some economic structures in which only Muslims were allowed to enter into military service. (The taxes were considered payment for security.) Churches and synagogues welcomed worshippers on their prescribed days. People were buried in cemeteries according to local religious tradition and culture. In the Jewish cemeteries of Toledo, Spain, headstones facing Jerusalem are inscribed in Hebrew and Arabic. The Metropolitan Museum of Art's "Art of the Arab Lands, Turkey, Iran, Central Asia and Later South Asia" describes the multicultural nature of these societies: Artisans and craftspeople of different faiths made the windows, doors and sacred artifacts for great houses of worship, libraries and palaces across continents and centuries, as well as household objects and books, sacred and secular alike.

The art and architecture of the far-reaching empires that eventually became Muslim-majority nations were breathtaking. Think of 16th-century Ottoman and Persian miniatures and the competition among artists for excellence, described in Orhan Pamuk's thriller, My Name is Red. Universities flourished, starting with the Al-Qarawiyyin mosque and religious school in Fez, followed by Baghdad's "House of Wisdom." Sciences ranked high in intellectual pursuit. Advancements in astronomy and navigation set the stage for the eventual exploration of the Americas — the success of which ironically triggered the economic decline of Silk Road societies. Demand for gold and chocolate outpaced desire for silks and spices, and trans-Atlantic traders outbid their trans-Asian competitors.

The caliphates and empires of Islam are rich with culture, gender equity (especially as compared with contemporaneous non-Muslim societies), literacy and the arts. They have also fought with one another as furiously as they fought the Crusaders. Safavids and Ottomans from the 16th to 19th centuries. Arabs and Turks during and after World War I. Syria's rebels and government today, as well as Libya's, along with the Islamic State and those it hopes to subjugate.

Muslims and non-Muslims, superpowers and small powers, powerbrokers and pawns alike must recognize that the extreme behaviors of politically motivated Muslims are not synonymous with Islamic values or the cultures of the caliphates.

What's happening today is tribal and political. It's about land, resources, trade routes and trading partners. It's about power, control of women, managing neighboring states and creating a new status quo. The next time you read, "revive," "restore," "Islamic" and "caliphate," remember: It's not about religion.