The Perils of a Putsch in Venezuela 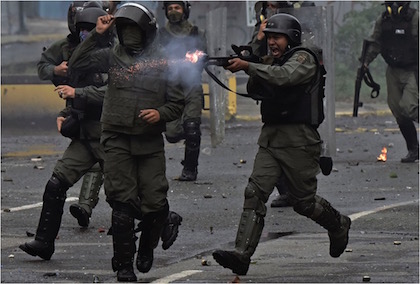 A member of the national guard fires his shotgun at opposition demonstrators during clashes in Caracas. (Carlos Becerra/AFP/Getty Images)

In recent months, high-ranking U.S. officials have been signaling to Venezuelan military leaders that they have Washington’s blessing to take the reins in Caracas. In a February speech ahead of his trip to Latin America, then-Secretary of State Rex Tillerson said, “In the history of Venezuela and South American countries, it is often times that the military is the agent of change when things are so bad and the leadership can no longer serve the people.”

Others have been blunter. Just a few days after Tillerson’s remarks, Florida Sen. Marco Rubio (R) took to Twitter to say that the world “would support the Armed Forces in #Venezuela if they decide to protect the people & restore democracy by removing a dictator.” And earlier this week, in a speech at Florida International University, Juan Cruz, U.S. President Donald Trump’s special assistant and senior director for western hemisphere affairs at the National Security Council, urged “the military to respect the oath they took to perform their functions.”

Giving the green light for a military coup is not only bad for America’s image; it is also a threat to U.S. strategic interests.

That’s because encouraging a putsch in Venezuela could backfire and end up increasing Russian and Chinese influence in the Western Hemisphere.

The U.S. officials praising the prospect of a military takeover seem to disregard the fact that U.S.-Venezuelan military relations are virtually nonexistent today. U.S. defense contacts with Venezuela declined sharply in the years following the rise of former Venezuelan President Hugo Chávez in 1999. Meanwhile, the Russians, Chinese, and Cubans have replaced the United States as the primary sources of financial, technical, and material support to the Venezuelan military. The mere threat of a coup in Venezuela could be enough to rally the military around hard-liners and compel U.S. rivals to consider their preferred alternatives to the Maduro regime as collapse becomes imminent. Rivals with economic, political, and geostrategic interests in Venezuela, such as Russia and China, are far better positioned than the United States to influence the Venezuelan military during any transition.

Moscow and Beijing will be especially interested in cultivating ties with the top brass in Caracas if they sense that offering economic and political support to a new Venezuelan leadership could change the mineral-rich country’s trajectory from an economic basket case to an economically and politically stable authoritarian regime. In such a situation, Russia, China, and Cuba — in some formal or informal configuration — could abandon the flailing and ineffective leadership of President Nicolás Maduro and back a military regime in uncomfortably close geographic proximity to the United States.

The current situation in Venezuela is untenable. Oil production is declining, public unrest is spreading, inflation is up nearly 13,000 percentage points in the last two months, and military and civilian elites are becoming increasingly dissatisfied. Moreover, other countries in Latin America that stood by Chavez in the past are now denouncing Maduro. Pressure for regime change is growing.

For now, the most viable path to change involves the military in some way. However, it would take years for the United States to rebuild substantive relations with the Venezuelan armed forces after almost two decades of estrangement. Making matters worse, Washington may not be prepared to provide the economic and security assistance or the political backing in international forums like the United Nations and the Organization of American States that would be needed to sustain a new military regime. Supporting such a regime would also create tensions between the United States and its allies in the Western Hemisphere and around the world, while legitimizing authoritarian political models at a time when China and Russia are already challenging the efficacy of democracy.

Russia, China, and Cuba all currently have extensive and friendly relations with the Venezuelan military.

Indeed, Russian, Chinese, and Cuban engagement with the Venezuelan armed forces has increased exponentially over the last decade — Venezuelan personnel have been attending Russian and Chinese military schools for years, and Venezuela is the top buyer in Latin America for Russian and Chinese military equipment. As for the Cubans, their security forces started providing technical assistance on the ground to the Venezuelan military shortly after the last — arguably U.S.-inspired — coup attempt in 2002.

In the event of a coup, these existing ties mean that the priorities of Moscow, Beijing, and Havana will likely prevail over Washington’s in managing a military transition. Moscow has experience in this regard. Russia and the Soviet Union before it supported the rise and maintenance of authoritarian regimes in Latin America — including Daniel Ortega in Nicaragua, Fidel Castro in Cuba, and military dictators such as Juan Velasco Alvarado in Peru.

The situation in Venezuela could also be an opportunity for Russia and China to expand their emerging strategic partnership with nations in the Western Hemisphere. Both countries are increasingly using their military ties to counter U.S. influence around the world. Russian and Chinese defense officials even discussed forging a strategic partnership in a series of recent meetings. For now, their relations have been limited to bilateral meetings of key leaders and joint military exercises. Still, that should be enough to give U.S. policymakers pause.

A coup in Venezuela would be a chance for China and Russia to collaborate on an issue far away from their own spheres of influence.

If successful, it would give them greater access to Venezuelan mineral resources as well as a military footprint in Latin America. China would likely be a silent underwriter, as it has been hesitant to openly challenge the United States in Latin America so far. Still, Beijing could provide much-needed political and economic support. Russia might flex its muscles more visibly. Both would likely avoid sending troops to support a military regime in Venezuela. However, there could be an increase in arms and equipment transfers, technical training, and Russian security contractors on the ground in Venezuela, much like what Russia has done in Syria.

At the moment, there is no indication that Russia, China, or Cuba, together or independently, are calling for a coup in Venezuela — but the United States is. U.S. policymakers should think twice before ceding space in the region to Washington’s geopolitical rivals.

A coup would not only pose a strategic threat; it would also harm U.S. economic interests. If a military regime propped up by Russia or China emerges in Venezuela, then it’s likely that the last remaining U.S. oil companies operating in Venezuela, namely Chevron and Halliburton, would be forced out and replaced by Russian and Chinese firms. Moscow and Beijing would also gain greater influence over other Latin American countries. Ultimately, it could lead to the emergence of authoritarian regimes across Latin America backed by Russia and China, which would increase tensions with the United States while cementing the influence of U.S. rivals in the region. In a worst-case scenario — the United States and its rivals could find themselves at war in the Western Hemisphere.

Policymakers praising the virtues of military coups should remember the many historical examples of armed intervention in Latin America that have come back to haunt U.S. leaders — Guatemala in 1954, Chile in 1973, Argentina in 1976. And they should consider the longer-term implications of a rival-backed regime across the Caribbean before encouraging a Venezuelan military intervention.