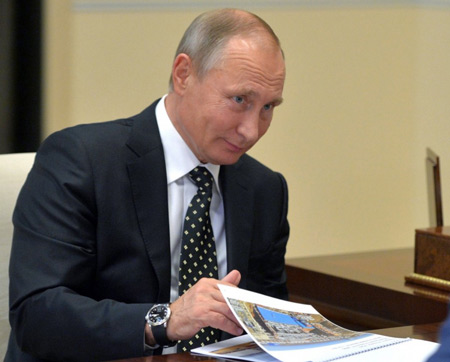 Remember the unverified “dossier” assembled by a shadowy foreign intelligence veteran who alleged all manner of nefarious, kinky and compromising ties between Donald Trump and Russia? Well, now the Trump team has its own dossier on Russian President Vladimir Putin. It’s better sourced, convincingly written, damning in its conclusions — and its author is scheduled to start working at the White House on Monday.

Fiona Hill, the incoming senior director for Russia and Europe on President Trump’s National Security Council staff, is the co-author of “Mr. Putin: Operative in the Kremlin,” essentially a 500-page pscyhological profile of the Russian leader, from his early KGB years through his rise and rule at the Kremlin. It’s hard to know who really runs U.S. foreign policy these days, but to the extent that Hill can influence the Trump administration’s views on Russia, this book suggests a more clear-eyed, realpolitik perspective on Putin’s intentions and capabilities, with low expectations for the rapprochement Trump imagined during the 2016 campaign. In this telling, Putin sees the United States as a malicious, incompetent and disrespectful power, an obstacle in his relentless effort to restore and expand the might of the Russian state.

His own might, too, of course. The greatness of Mother Russia is his goal, but the power of Vladi­mir Putin is his means. 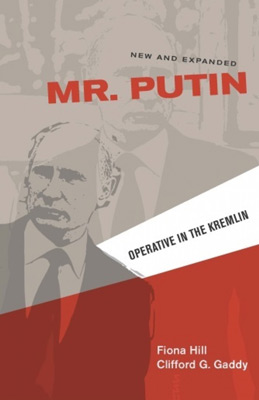 First published in 2013 and updated in 2015, the book breaks down Putin’s overlapping personas, showing how they shape his dominance at home and rivalries abroad. Hill and co-author Clifford G. Gaddy of the Brookings Institution list six identities that they think make up Putin’s “mental outlook, his worldview” — the Statist, the History Man, the Survivalist, the Outsider, the Free Marketeer and the Case Officer.

The last identity is especially relevant, because underlying everything in this book is a vision of Putin as manipulator — he is “a master at manipulating information, suppressing information, and creating pseudo-information” — and as extortionist, deploying blackmail against opponents, allies and (take note here, President Trump) foreign leaders. “As he can fully trust only himself,” Hill and Gaddy write, “Putin applies extortionary methods to everyone else — basically mutually assured incrimination to ensure loyalty.”

When the authors call Putin a “statist,” they do not imply an ideological vision of a command economy; they see no ideology in him at all. Putin regards Russia’s post-Soviet stumbles of the 1990s — beholden to the West, rudderless at home — as an unforgivable humiliation he must avenge. He declared himself a “servant of the state” in a 5,000-word manifesto he issued shortly before first reaching the presidency. “Putin pledged to rebuild the Russian state, protect Russia’s sovereignty, preserve domestic stability and unity, and ensure national security,” Hill and Gaddy recount. He did not, they note archly, explain how he would do so.

The tools at his disposal include deft historical symbolism — Putin the History Man is an avid reader of Russia’s trials and glories, and he appreciates “useful history” that reinforces the centrality of the state. The story of his own family helps. Putin stresses his deep roots, back to the early 17th century, in the Ryazan province southeast of Moscow. Putin the Survivalist notes how his parents made it through the siege of Leningrad, although his older brother did not. “This personal story of death and survival,” the authors write, “fits neatly into the general context of Russia’s national historical narrative. . . . Every survived calamity reaffirms the special status of Russia in history.”

Those who ignore history may be condemned to repeat it, but those who know it well are inclined to exploit it.

Even those political leaders most embedded in the machinery of governing and influence portray themselves as outsiders, but Putin’s outsiderness is instructive. He is of relatively humble origins. He was rarely at the center of things early in his professional life, missing the ferment of the Gorbachev years while serving in Dresden with the KGB, and then spending much of the 1990s as a top municipal official in St. Petersburg. This created a gap in his cultural knowledge and political references. The 1970s and 1990s are his touchstones, but “the pluralistic, creative part of the late 1980s, the Gorbachev era of optimism, is the missing link,” the authors assess. He relishes inappropriate humor (testicle-related jokes, in particular, are a Putin specialty) and likes to make a show of dressing down subordinates or oligarchs. “The public loves to see him admonishing figures they do not like in the same language that they would use if they had the opportunity,” the authors note, in one of the book’s many Trumpian echoes.

“The Outsider is pragmatic. He has no vested interests in policies or in ideologies,” Hill and Gaddy emphasize. “In a system so burdened by ideology, only an outsider could clearly see the flaws of the system.”

Putin is a Free Marketeer in sort of an “Art of the Deal” sense. “Capitalism, in Putin’s understanding, is not production, management, and marketing. It is wheeling and dealing. It is not about workers and customers. It is about personal connections with regulators. It is finding and using loopholes in the law.” For Putin, the economy is a “battlefield,” the authors write, and both as deputy mayor of St. Petersburg and later at the Kremlin, Putin “used methods of coercion” that relied on deep knowledge of the personal foibles and financial misdeeds of his opponents. Whether it was local politicians, foreign business leaders, or, say, former Ukrainian president Viktor Yunakovych, “the focus was on finding and using leverage.”

Here is the Case Officer. Because of his 15 years in the KGB, Putin is skilled in “studying the mind of the targets, finding their vulnerabilities, and figuring out how to use them.” This is how he has managed Russia’s oligarchs, the authors say, using their wealth — and their desire for more — against them.

“Money is ever-present in the system, but it is not money that guarantees loyalty or holds the top level together,” Hill and Gaddy explain. “Instead, it is the fact that the money derives from activity that is or could be found to be illegal. Participants in the system are not bought off in the classic sense of that term. They are compromised; they are made vulnerable to threats. . . . Corrupt, even illegal, activity will be kept secret as long as the individual continues to play the game.” And the referee and star player is Putin himself. This is not an old-boy network, but a “one-boy network.”

There are gaps in this book. Cyber warfare makes but a fleeting appearance, while the death of Putin critics in, shall we say, suspicious circumstances is not a focus, either. And the authors fall in love with their profile approach a bit too much. They’re convinced for instance, that a 1970s American management book is central to Putin’s worldview because he cited it in his dissertation, and contort themselves to make the case. (Maybe he just wasn’t that into it.) Even so, I suspect “Mr. Putin” offers American leaders a better sense of the man than one gets from looking into his eyes and seeking his soul, or from offering his government a misspelled reset button.

It is not clear, though, that he has a good sense of the West, or of the United States in particular. This country is an abstraction for him; he knows few Americans, and those he knows, such as George W. Bush and Obama, he does not like. (Henry Kissinger is Putin’s favorite American, regarding him “literally the German in the White House,” the authors mention.) Instead, Putin views the United States through the insult of NATO expansion, the shame of the Kosovo intervention and the insidious support for pro-democracy nongovernmental organizations that only undercut Russian unity. He believes all local protesters are driven by “fringe minorities and professional oppositionists, or by foreign funding and intervention.”

Does he believe that or, like other leaders we know, is he simply deligitimizing legitimate protests? And here the authors offer an unnerving interpretation. “Putin has spent a great deal of time in his professional life bending the truth, manipulating facts, and playing with fictions,” they write. “He is also, we conclude, not always able to distinguish one from the other.”

Meet the new boss, Fiona Hill. Maybe not so different from the other boss you’ve studied so closely. When you’re ready, I know just the next book for you to write.