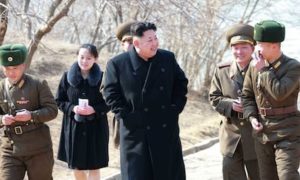 The promotion, reported by North Korean state media, indicates that the 28-year-old has replaced Kim Jong-un’s aunt, Kim Kyong Hee, who was a key decision maker when former leader Kim Jong-il was alive.

“It shows that her portfolio and writ is far more substantive than previously believed and it is a further consolidation of the Kim family’s power,” said Michael Madden, a North Korea expert at Johns Hopkins University’s 38 North website.

In January, the US treasury blacklisted Kim Yo-jong along with other North Korean officials over “severe human rights abuses”.

“Ri can now be safely identified as one of North Korea’s top policy makers,” said Madden. “Even if he has informal or off the record meetings, Ri’s interlocutors can be assured that whatever proposals they proffer will be taken directly to the top,” he said.

In a speech to a meeting of the powerful Central Committee of the ruling Workers’ Party on Saturday, Kim said his nuclear weapons were a “powerful deterrent” which guarantee North Korea’s sovereignty.

His comments came hours after US President Donald Trump said “only one thing will work” in dealing with the isolated country.Trump did not make clear to what he was referring, but his comments seemed to be a further suggestion that military action was on his mind.

In recent weeks, North Korea has launched two missiles over Japan and conducted its sixth nuclear test, and may be fast advancing toward its goal of developing a nuclear-tipped missile capable of hitting the U.S. mainland. North Korea is preparing to test-launch such a missile, a Russian lawmaker who had just returned from a visit to Pyongyang was quoted as saying on Friday.

Donald Trump has previously said the United States would “totally destroy” North Korea if necessary to protect itself and its allies.

The situation proved that North Korea’s policy of “byungjin”, meaning the parallel development of nuclear weapons and the economy was “absolutely right“, Kim Jong Un said in the speech.

“The national economy has grown on their strength this year, despite the escalating sanctions,” said Kim, referring to UN Security Council resolutions put in place to curb Pyongyang’s nuclear and missile programmes.