The North Atlantic Treaty Organization, a Cold War cornerstone of transatlantic security, has significantly recast its role in the past twenty years. Founded in 1949 as a bulwark against Soviet aggression, NATO has evolved to confront threats ranging from piracy off the Horn of Africa to human trafficking in the Mediterranean. But while the modern NATO is generally more recognized for its role beyond rather than within Europe, Russian actions in recent years, particularly its 2014 intervention in Ukraine, have refocused the alliance's attention on the continent. Recent developments have also exposed unresolved tensions over NATO's expansion into the former Soviet sphere.

After the demise of the Soviet Union in 1991, Western leaders intensely debated the future direction of the transatlantic alliance. President Bill Clinton's administration favored expanding NATO to both extend its security umbrella to the east and consolidate democratic gains in the former Soviet bloc. On the other hand, some U.S. officials wished to peel back the Pentagon's commitments in Europe with the fading of the Soviet threat.

European NATO members were also split on the issue. London feared the organization's expansion would dilute the alliance, while Paris believed it would give NATO too much influence. Many in France hoped to integrate former Soviet states via European institutions. There was also concern about alienating Russia.

For the White House, the decision held larger meaning. "[President Clinton] considered NATO enlargement a litmus test of whether the U.S. would remain internationally engaged and defeat the isolationist and unilateralist sentiments that were emerging," wrote Ronald D. Asmus, one of the intellectual architects of NATO expansion, in Opening NATO's Door.

In his first trip to Europe as president, in January 1994, Clinton announced that NATO enlargement was "no longer a question of whether but when and how." Just days before, alliance leaders approved the launch of the Partnership for Peace, a program designed to strengthen ties with Central and Eastern European countries, including many former Soviet republics like Russia, Ukraine, and Georgia.

Headquartered in Brussels, NATO is a consensus-based alliance, where decisions reflect the membership's collective will. But individual states or subgroups of allies may initiate action outside NATO auspices.

Many defense planners also felt that a post–Cold War vision for NATO needed to look beyond collective defense—Article V of the North Atlantic Treaty states that "an armed attack against one or more [member states] in Europe or North America shall be considered an attack against them all"—and focus on confronting acute instability outside its membership. "The common denominator of all the new security problems in Europe is that they all lie beyond NATO's current borders," said Sen. Richard Lugar (R–IN) in a 1993 speech.

The breakup of Yugoslavia in the early 1990s and the onset of bloody ethnic conflict tested the alliance on this point almost immediately. What began as a mission to impose a UN-sanctioned no-fly zone over Bosnia and Herzegovina evolved into a bombing campaign on Bosnian Serb forces that military experts say was essential to ending the conflict. It was during Operation Deny Flight in April 1994 that NATO conducted its first combat operations in its forty-year history, shooting down four Bosnian Serb aircraft.

In 2016, NATO pursues several missions: peacekeeping in Kosovo; counterterrorism and human-trafficking patrols in the Mediterranean; counter-piracy off the Horn of Africa (scheduled to end in December 2016); support for African Union forces in Somalia; security assistance in Afghanistan; and policing the skies over eastern Europe.

Headquartered in Brussels, NATO is a consensus-based alliance, where decisions reflect the membership's collective will. But individual states or subgroups of allies may initiate action outside NATO auspices. For instance, the United States, France, and the UK began policing a UN-sanctioned no-fly zone in Libya in early 2011 and within days transferred command of the operation to NATO (once Turkish concerns had been managed). At the same time, all member states are not required to participate in every operation. For instance, Germany and Poland declined to contribute directly to the campaign in Libya.

The primary financial contribution made by member states is the cost of deploying their respective armed forces for NATO-led operations. (These expenses are not part of the formal NATO budget, which funds civilian and military headquarters and certain security infrastructure.) In 2014, NATO members collectively spent an estimated $850 billion on defense. The United States accounted for more than 70 percent of this, up from about half during the Cold War.

U.S. officials have often criticized European members for hollowing their defenses. In 2006, members committed to spending 2 percent of GDP on defense, but by 2015 just five met this target—the United States, Estonia, Greece, Poland, and the UK.

In his final policy speech as U.S. defense secretary in 2011, Robert Gates warned of a "two-tiered alliance," where some members lacking in military capability specialize in "soft" humanitarian missions while others fulfill "hard" combat roles.

NATO officially has acknowledged some of this disparity on its website: "There is an over-reliance by the Alliance as a whole on the United States for the provision of essential capabilities, including for instance, in regard to intelligence, surveillance and reconnaissance; air-to-air refueling; ballistic missile defense; and airborne electronic warfare."

NATO invoked its collective defense provision (Article V) for the first time following the September 11 attacks on the United States, perpetrated by the al-Qaeda terrorist network based in Afghanistan. Shortly after U.S.-led forces toppled the Taliban regime in Kabul, the UN Security Council authorized an International Security Assistance Force to support the new Afghan government. NATO officially assumed command of ISAF in 2003, marking its first operational commitment beyond Europe. The fact the alliance was used in Afghanistan "was revolutionary," said NATO expert Stanley Sloan in a CFR interview. "It was proof the allies have adapted [NATO] to dramatically different tasks than what was anticipated during the Cold War."

But some critics questioned NATO's battlefield cohesion in Afghanistan. Allies agreed on the central goals of the mission—the stabilization and reconstruction of Afghanistan—but some members restricted their forces from participating in counterinsurgency and other missions, a practice known as "national caveats." Troops from the United States, the UK, Canada, and the Netherlands saw some of the heaviest fighting and bore the largest casualties, stirring resentments among alliance states. After thirteen years of war, ISAF completed its mission in December 2014.

In early 2015, NATO and more than a dozen partner countries began a non-combat support mission of about twelve thousand troops (roughly half are U.S.) to provide training, funding, and other assistance to the Afghan government.

Many current and former Russian leaders believe the alliance's inroads into the former Soviet sphere are a clear betrayal of alleged guarantees to not expand eastward after German reunification in 1990.

Moscow has viewed NATO's post–Cold War expansion into Central and Eastern Europe with great concern. (As of 2016, twelve Partnership for Peace members have joined NATO.) Many current and former Russian leaders believe the alliance's inroads into the former Soviet sphere are a betrayal of alleged guarantees to not expand eastward after German reunification in 1990—although some U.S. officials involved in these discussions dispute this pledge. 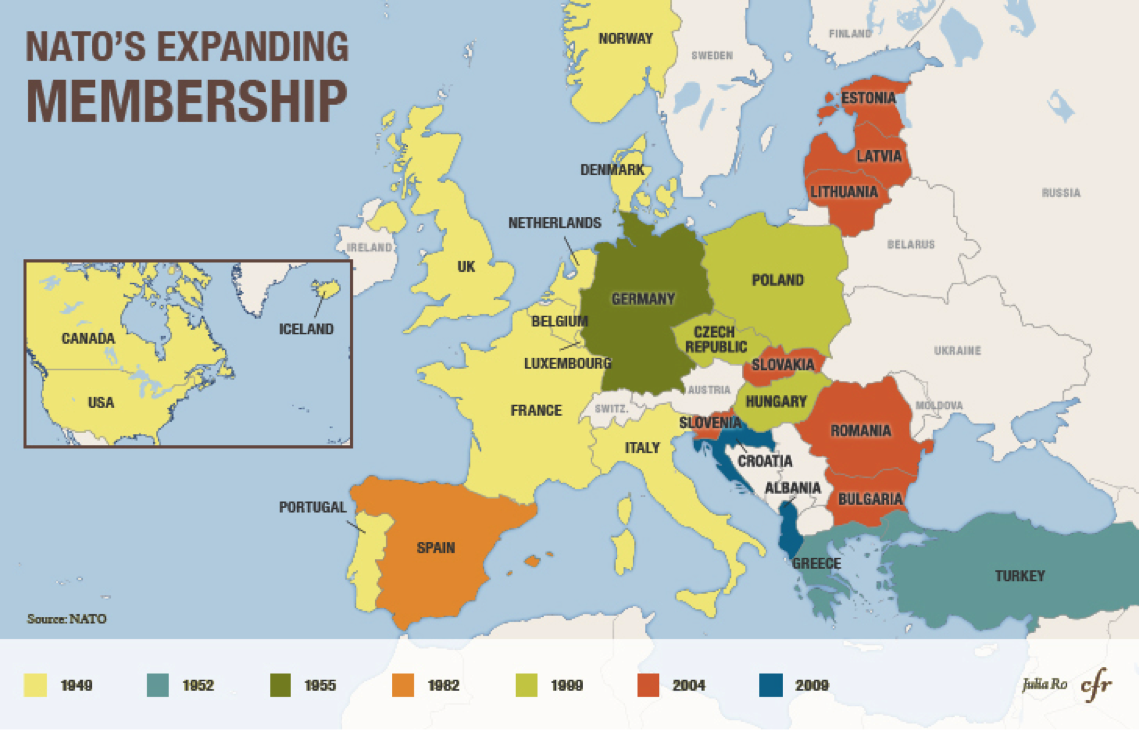 To be sure, most Western leaders knew the risks of enlargement. "If there is a long-term danger in keeping NATO as it is, there is immediate danger in changing it too rapidly. Swift expansion of NATO eastward could make a neo-imperialist Russia a self-fulfilling prophecy," wrote then-Secretary of State Warren Christopher in the Washington Post in January 1994.

Over the years, NATO and Russia have taken significant steps toward reconciliation, particularly with their signing of the 1997 Founding Act, which established an official forum for bilateral discussions. But experts say that a persistent lack of trust has plagued relations.

NATO's Bucharest summit in the spring of 2008 deepened the suspicion. While the alliance delayed Membership Action Plans for Ukraine and Georgia, it vowed to support the pair's full membership in the future, despite repeated warnings from Russia of political and military consequences. Russia's invasion of Georgia in the summer was a clear signal of Moscow's intentions to protect what it sees as its sphere of influence, experts say.

Russia's annexation of Crimea and destabilization of eastern Ukraine in 2014–2016, have poisoned relations with NATO for the foreseeable future. "We clearly face the gravest threat to European security since the end of the Cold War," said NATO Secretary-General Anders Fogh Rasmussen after Russia's intervention in March 2014. Weeks later, NATO suspended all civilian and military cooperation with Russia but said that high-level political dialogue would continue.

In an address honoring the annexation of Crimea in March 2014, President Vladimir Putin expounded Russia's deep-seated grievances with the alliance. "They have lied to us many times, made decisions behind our backs, placed us before an accomplished fact. This happened with NATO's expansion to the East, as well as the deployment of military infrastructure at our borders," Putin told Russia's parliament. "In short, we have every reason to assume that the infamous [Western] policy of containment, led in the eighteenth, nineteenth, and twentieth centuries, continues today."

In December 2015, NATO invited Montenegro, a former republic of Yugoslavia, to begin ascension talks that are expected to take about a year to complete. Montenegro would be the first new NATO member since 2009. The Kremlin responded by warning that NATO’s eastward expansion “cannot but result in retaliatory actions.”

Another perennial point of contention has been NATO's ballistic missile defense shield, which is being deployed across Europe in several phases. The United States, which developed the technology, says the system is only designed to guard against limited missile attacks, particularly strikes from Iran. However, the Kremlin says the technology could be updated and may eventually tip the strategic balance toward the West.

Fears of further Russian aggression have prompted alliance leaders to reassess defenses on the continent, particularly in the East. NATO allies in 2015 agreed to establish command centers in six eastern periphery states: Bulgaria, Estonia, Latvia, Lithuania, Poland, and Romania. The outposts are expected to open in 2016 and will support a new rapid-reaction force of about five thousand troops, intended to respond to crises within days. In a major emergency, NATO military planners say that a force of about forty thousand can be marshalled. The United States is also planning to shift heavy military assets, including tanks, into some of these countries. The Obama administration has asked Congress to approve a 2017 budget that would more than quadruple U.S. military spending in Europe, to $3.4 billion.

Meanwhile, NATO allies, particularly the United States, Denmark, Germany, and the UK have increased air patrols over Poland and the Baltic states. In 2015, NATO jets scrambled to intercept Russian warplanes violating allied airspace more than four hundred times. In December, Turkey-Russia tensions flared after a Turkish fighter shot down a Russian warplane that Ankara claimed violated its airspace and ignored repeated warnings. Russia denied the encroachment and said the incident would have “serious consequences for Russian-Turkish relations.” Secretary General Stoltenberg expressed NATO’s solidarity with Turkey but called on alliance members and Russia to help keep the situation from escalating.

NATO members have also boosted direct security collaboration with Ukraine, an alliance partner since 1994. But as a nonmember, Ukraine remains outside of NATO's defense perimeter, and there are clear limits on how far it can be brought into institutional structures. The United States and the UK sent modest detachments of troops to train Ukrainian personnel in 2015, but the Obama administration has refrained from providing Kiev with lethal weapons to help counter the Russia-backed insurgency out fear this would escalate the conflict.

In the longer term, some defense analysts believe the alliance should consider advancing membership to Finland and Sweden, two Partnership for Peace countries with a history of avoiding military alignment. Both countries have welcomed greater military cooperation with NATO following Russia’s intervention in Ukraine. (Nordic peers Denmark, Iceland, and Norway are charter NATO members.)