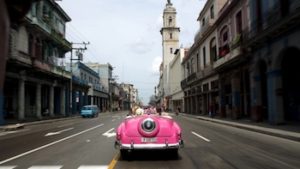 Tourists ride in a vintage car in Havana. Alexandre Meneghini/Reuters

The U.S.-Cuba relationship has been plagued by distrust and antagonism since 1959, the year Fidel Castro overthrew a U.S.-backed regime in Havana and established a socialist state allied with the Soviet Union. During the half century that followed, successive U.S. administrations pursued policies intended to isolate the island country economically and diplomatically. The United States has sanctioned Cuba longer than any other country.

Presidents Barack Obama and Raul Castro, who replaced his brother as Cuban leader in 2008, took some extraordinary steps to normalize bilateral relations, meeting with each other, restoring full diplomatic ties, and easing travel restrictions. President Donald J. Trump has reversed some actions taken by the Obama administration and raised the prospect that the United States might move to further roll back business ties.

The tumultuous U.S.-Cuba relationship has its roots in the Cold War. In 1959, Fidel Castro and a group of revolutionaries seized power in Havana, overthrowing the U.S.-backed government of Fulgencio Batista. Despite misgivings about Castro’s communist ideology, the United States recognized his government. However, as Castro’s regime increased trade with the Soviet Union, nationalized U.S.-owned properties, and hiked taxes on U.S. imports, the United States responded with escalating economic penalties. After slashing Cuban sugar imports, Washington instituted a ban on nearly all U.S. exports to Cuba, which President John F. Kennedy expanded into a full economic embargo that included stringent travel restrictions.

The United States severed diplomatic ties with Cuba and began pursuing covert operations to overthrow the Castro regime in 1961. The Bay of Pigs invasion, a botched attempt to topple Castro backed by the Central Intelligence Agency, fueled Cuban mistrust and nationalism, and encouraged Havana to allow the Soviet Union to install nuclear missile sites on the island in secret. U.S. surveillance aircraft uncovered the installations in October 1962, setting off a thirteen-day showdown between the Kennedy administration and Soviet leader Nikita Khrushchev that threatened to escalate into nuclear war. In the end, Khrushchev agreed to withdraw Soviet missiles in exchange for a pledge from Kennedy not to invade Cuba and to remove U.S. nuclear missiles from Turkey.

In the decades that followed, economic and diplomatic isolation became the major prongs of U.S. policy toward Cuba. In 1982, the Ronald Reagan administration labeled Cuba a state sponsor of terrorism for its support of leftist militant groups in Central America and Africa. Both Presidents George H.W. Bush and Bill Clinton signed laws—the Cuba Democracy Act of 1992 and the Cuban Liberty and Democratic Solidarity Act of 1996 [PDF]—that significantly strengthened the U.S. sanctions regime, requiring Cuba to transition to a democratically elected government that excludes the Castros before the embargo could be removed. (Raul has said he will leave office in 2018.) Some adjustments were made to the embargo in 1999 to allow for the export of certain U.S. medical supplies and food products to the island, but the introduction of the Commission for Assistance to a Free Cuba under President George W. Bush increased enforcement of existing sanctions. The Cuban government estimated that U.S. trade restrictions cost the country $4.6 billion in economic damages in 2015 and a total of $126 billion since the start of the embargo.

During the 2008 U.S. election, presidential candidate Barack Obama said that it was time for the United States to “pursue direct diplomacy” with Cuba, and pledged that he would as president meet with Raul Castro, who had recently replaced his brother Fidel as leader. Several weeks after taking office, the Obama administration eased restrictions on remittances and travel, allowing Cuban Americans to send unlimited funds into Cuba and permitting U.S. citizens to travel to Cuba for religious and educational purposes. Over the course of his first term in office, Obama continued modest loosening of restrictions in these areas.

Meanwhile, the new Cuban leadership also signaled an openness to reform. Facing an aging population, heavy foreign debt, and economic hardship amid the global economic downturn, Raul Castro began in 2009 to liberalize parts of Cuba’s largely state-controlled economy. Reforms in subsequent years included decentralizing the agricultural sector, relaxing restrictions on small businesses, liberalizing real estate markets, making it easier for Cubans to obtain permission to travel abroad, and expanding access to consumer goods. Cuba’s private sector swelled as a direct result, and in 2014 was reported to be about 20 percent [PDF] of the country’s workforce. Cuban government figures estimate that the number of self-employed workers nearly tripled between 2009 and 2013.

Obama and Castro surprised the world in late 2014, announcing that their governments would restore full diplomatic ties and begin to ease more than fifty years of bilateral tensions. The historic moment marked the culmination of eighteen months of secret diplomacy brokered by Pope Francis in which the parties agreed to an exchange of prisoners, including intelligence officers and a U.S. Agency for International Development (USAID) contractor, among other concessions.

The thaw in relations continued in the months that followed. The Obama administration eased travel and trade restrictions on Cuba, and removed it from an official list of terrorism sponsors. Cuba’s inclusion on the U.S. blacklist was a major obstacle to normalization talks. The two governments also reopened their embassies.

In early 2016, President Obama took another significant step down the normalization path, visiting Havana in what was the first trip to Cuba by a sitting U.S. president since Calvin Coolidge toured the island in 1928. In a keynote address broadcast live with Raul Castro sitting in the audience, Obama urged both countries to press on with reforms. The Cuban government should continue political and economic liberalization, and the U.S. Congress should lift the trade embargo, he said. Ahead of his trip, Obama further loosened U.S. travel and financial restrictions with regard to Cuba. Later that year, commercial U.S. airlines began offering service between the countries for the first time in more than fifty years.

Days before leaving office in January 2017, Obama repealed the so-called “wet foot, dry foot” policy, which had since 1995 allowed Cubans who reached U.S. shores without authorization to pursue permanent residency there. The move brought the U.S. government’s treatment of Cubans in line with its handling of other undocumented immigrants. The Cuban government welcomed the change and agreed to allow back into the country all Cubans removed by the United States.

Leaders in both U.S. political parties want to see the Cuban government improve its human rights record as part of significant political and economic reforms. Human Rights Watch reported that Cuban authorities continued to “to repress dissent and discourage public criticism" in 2016, and the Cuban Commission on Human Rights and National Reconciliation documented a total of 9,940 arbitrary detentions by the Cuban government last year. But there is disagreement in Washington on what the United States should do to encourage that process, particularly on the question of the trade embargo, the last major diplomatic obstacle on the road to normal U.S.-Cuba relations. Most Democrats, along with some Republicans, support ending the embargo forthwith, which they hope will spur further liberalization and human rights improvements in Cuba. On the other hand, many Republican lawmakers say the Cuban government needs to move first and institute greater reforms before the United States makes any more concessions.

There is widespread support for normalization in both the United States and Cuba. A Pew Research poll conducted in early 2015 found 63 percent of Americans approved of President Obama’s decision to resume diplomatic relations, while another poll from that period found that 97 percent of Cubans thought normalization is a positive thing for the island.

There is widespread support for normalization in both the United States and Cuba.

A poll conducted in early 2016 by CBS News and the New York Times found that 55 percent of Americans favored ending the trade embargo with Cuba. Meanwhile, global support for normalization has been overwhelming, particularly in Latin America. In 2016, the UN General Assembly approved a resolution condemning the U.S. embargo for the twenty-fifth consecutive year, with 191 member countries backing the resolution.

The death of Fidel Castro and election of Donald J. Trump in late 2016 rekindled debates over U.S.-Cuba policy. President Trump announced during a visit to Miami in June 2017 that he would reinstate some restrictions on travel and trade that had been eased by the Obama administration, but would not break diplomatic relations. Trump said that the “outcome of the last administration’s executive actions has been only more repression” and issued a memorandum directing the U.S. Treasury and Commerce Departments to begin implementing the new regulations within a month. Those include reinstating the ban on individual travel by Americans to Cuba; halting economic transactions involving GAESA, a military-run conglomerate; and regularly reporting on human rights progress in Cuba. Trump said U.S. sanctions will not be lifted until Cuba frees all political prisoners and holds free and fair elections, among other rights-related conditions.

Some U.S. business leaders and members of Congress criticized the policy reversal, saying isolating Cuba could worsen the economic and political situation there. Administration officials said the new restrictions will not disrupt existing U.S. business ventures; many U.S.-based companies, including Google, Airbnb, and Starwood Hotels & Resorts, invested heavily in Cuba following the warming of relations.

The Trump administration’s partial rollback, along with the reelection of Republican majorities to the U.S. Congress in 2016, increased the likelihood that the trade embargo will remain in place. Republican lawmakers in both chambers have routinely blocked bills that would roll back the embargo. But some analysts say Raul Castro’s eventual departure from office could provide a political window for lifting it. Just before Trump announced the new restrictions, Castro, who has said he will step down in 2018, at the end of his second term, called for municipal elections to take place in October 2017 as the first step in the process of electing a new Cuban leader.