Authoritarianism in Eritrea and the Migrant Crisis

Authoritarianism in Eritrea and the Migrant Crisis

Tens of thousands of Eritreans have arrived at Europe's shores in recent years seeking asylum. They make up a significant share of the unprecedented stream of migrants and refugees making their way to the European Union, undertaking dangerous journeys while challenging the bloc to find a collective response consistent with refugee law.

Many more Eritreans reside in neighboring Ethiopia and Sudan, bringing the refugee population to about half a million, and making the country of six million people "one of the world’s fastest-emptying nations," according to the Wall Street Journal. The scale of the migration has heightened Western interest in conditions inside what is one of the world's most closed countries, where those who have fled describe a long-standing system of forced labor, among other human rights violations, that a UN commission said "may constitute crimes against humanity."

How is Eritrea governed?

Eritrea, Africa’s second-newest state, came into being in 1991, when the Eritrean People's Liberation Front (EPLF) broke away from Ethiopia after three decades of guerrilla struggle. Its independence was codified in a 1993 popular referendum backed by the UN. Isais Afwerki, a guerrilla leader, became president, and remade the EPLF as the People’s Front for Democracy and Justice (PFDJ). It remains the only legally sanctioned political party.

The one-party system, a holdover from Eritrea’s tumultuous birth, became entrenched as the military and ruling party refused to relinquish their privileged positions, citing external threats to the young country's survival. National development was the first priority for the economically ravaged country, and at the outset the EPLF/PFDJ were widely perceived as legitimate rulers. The government convened a legislature, and a draft constitution was ratified in 1997. But the legislature remained without authority, and the constitution was never implemented, nor were promised national elections ever held.

Eritrea's political culture was forged in the liberation struggle, when the guerrilla movement had little international backing and considered any dissent a threat to its survival, according to the International Crisis Group. A UN Human Rights Councilcommission of inquiry established in 2014 characterized the regime's methods as "rule by fear." Eritrea has rejected the commission's findings. According to the UN inquiry and research by rights groups, the country has widespread networks of informants, coerced by the state, and those suspected of treasonous behavior are subject to arbitrary arrest, forced disappearances, extrajudicial executions, and torture. Individuals who run afoul of the authorities are often held in harsh conditions in makeshift prisons. Citizens face restrictions on internal movement and speech, and domestic media is controlled by the state.

Is Eritrea at war?

No, but residual tensions from a 1998–2000 war border with Ethiopia remain, experts say. That war ended with the Algiers Accord in 2001, but Ethiopia does not recognized the border demarcated under the agreement, and Eritrea considers some territory that remains under Ethiopian control as illegally occupied. Ethiopia rejects that claim. The ongoing state of hostility, which the Eritrean regime characterizes as one of "no war, no peace," fostered a siege mentality that provided Afwerki with a rationale for entrenching the police state, experts say.

In 2009, the UN Security Council sanctioned Eritrea for its alleged support of al-Shabab, an Islamist militia in Somalia, as a means of undermining the much larger and more powerful Ethiopia. The UN measures include an arms embargo and travel bans and asset freezes for designated individuals. By 2012, UN monitors found that Eritrea hadbowed to international pressure and stopped supporting al-Shabab, but said Eritrea continued to lend support to Ethiopian antigovernment militias.

This finding raised pressure for the Security Council to rescind the sanctions, but the veto-wielding United States has opposed such measures and the sanctions remain in effect. This U.S. position stems, at least in part, from its close security ties with Ethiopia. Watchdog groups have recently called attention to a declining human rights situation in Ethiopia. If the United States were to temper its support for Ethiopia in response to rights concerns, it could change its policies on Eritrea, experts say.

Why are people fleeing the country?

Conscription in the national-service program is the factor most commonly cited by asylum seekers who have fled the country. The state has justified the mass mobilization with the need for national development and to foster a common sense of national identity. A statutory requirement of eighteen months of military or civilian service was extended in 2002, following the war with Ethiopia, so that it became, in practice, indefinite, with many adults reportedly serving the state into their fifties. Conscripts often earned less than a subsistence wage.

The UN commission of inquiry found that national service often entails “arbitrary detention, torture, sexual torture, forced labor, absence of leave, and the [sic] ludicrous pay,” calling it “an institution where slavery-like practices are routine.” For many, leaving national service is only possible by deserting the military and fleeing the country, the commission found.

The Eritrean foreign ministry called the report's allegations "totally unfounded," and said they were part of a "politically motivated campaign to undermine the political, economic, and social progress the country is making."

Eritrea has little foreign investment, but the extractive industry has raised concern from Human Rights Watch about foreign firms being complicit in forced labor. The Canadian mining firm Nevsun Resources contracted with the PFDJ-owned Segen Construction Company to build infrastructure around a mine it operates. Nevsun faces a lawsuit by Eritrean refugees in Canada alleging its complicity in forced labor. The company has denied the allegations.

"The Eritrean government pushes strongly for these companies to contract work out to state- and party-affiliated contractors, which themselves make heavy use of forced labor through the country's national-service program," says Christopher Albin-Lackey, a researcher at Human Rights Watch who wrote the report.

How many people have fled?

Five thousand Eritreans leave the country each month, the UN commission found, making it one of the world's top producers of refugees. The government has taken an ambivalent stance toward the outflow, the International Crisis Group reports, in part because it benefits from the large diaspora. Through consulates or party affiliates overseas, it collects a 2 percent income tax from many émigrés, reportedly on the threat of denying them consular services like travel documents, or services to family members who remain in Eritrea. In 2011 the UN Security Council called on Eritrea to "cease using extortion, threats of violence, fraud, and other illicit means" to collect this tax, which yielded $73 million for the state from 2010 to 2013, the UN monitoring group found in 2014.

Eritreans in the diaspora also contribute to Eritrea's economic survival by sending their families remittances, which provide the country with foreign reserves and keep families afloat. (The UN Development Program ranks Eritrea 182 out of 187 countries and territories for human development, but limited access for humanitarian agencies and organizations mean there is little reliable information.)

Where do the refugees and asylum-seekers go?

A quarter million Eritrean refugees and asylum seekers have settled in refugee camps and cities in neighboring Ethiopia and Sudan. A shortage of services and few educational and employment opportunities there, as well as protracted and seemingly indefinite stays in refugee camps, cause some to take the risky journey to Europe. "Deprived of any prospects for a better future and feeling that they have nothing to lose, many fall prey to unscrupulous smugglers," the UN said, calling particular attention to a rise of unaccompanied minors. By the end of 2014, the UN refugee agency reported eighty thousand Eritrean refugees residing in the EU, and its member-states received another 16,690 asylum applications in the first eight months of 2015. (EU countries grant asylum to about 90 percent of Eritrean asylum seekers.) 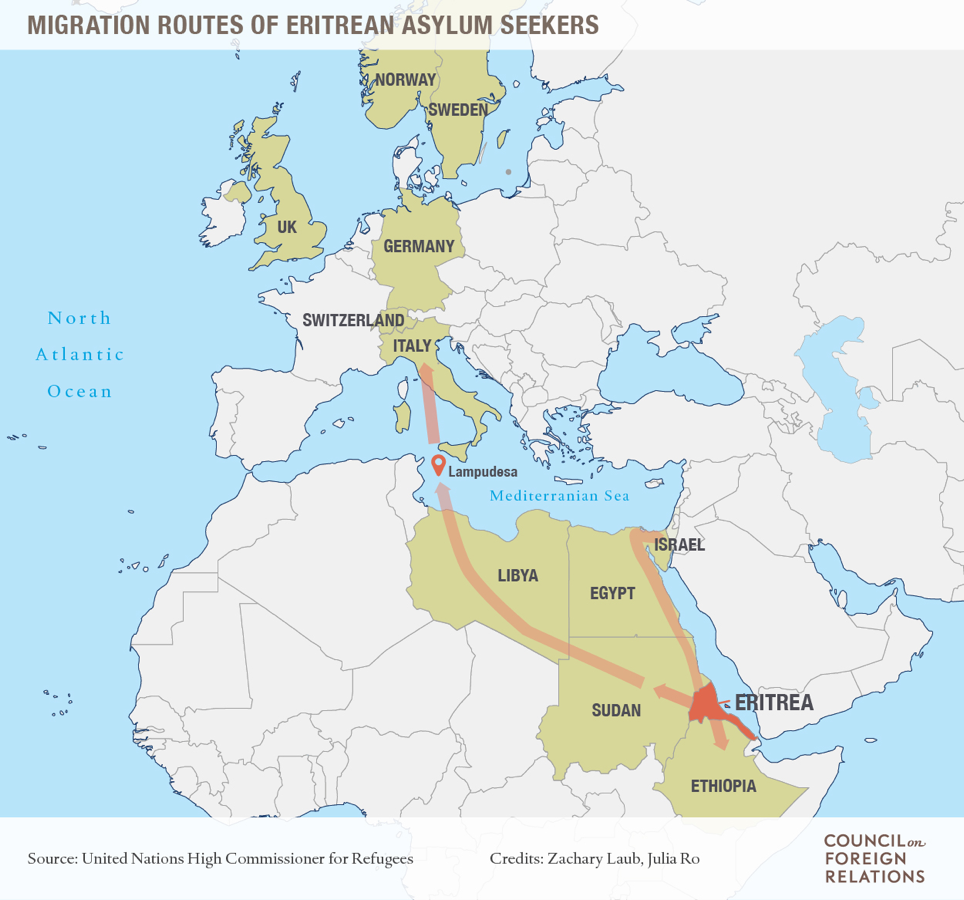 The major route takes asylum seekers through the Sahara Desert to Libya, where they board often-unseaworthy vessels bound for Italy. From Italy they often go on to other European destinations. In the first eight months of 2015, the top three recipients of asylum applications from Eritrean nationals were Switzerland (7,475), Germany (5,500), and Sweden (4,645)—countries which, along with the UK and United States, have well-established diaspora communities.

Eritreans are the most common users of the central Mediterranean route, which spans from North Africa to Italy. In the first eight months of 2015, 30,708 Eritreans arrived in Italy, according to the International Organization for Migration (IOM). In the same period, another 2,703 migrants—Eritreans perhaps foremost among them—died at sea along that route, which the IOM calls the world's most dangerous border crossing.

Another oft-traveled route goes through Egypt to Israel. In the Sinai Peninsula, Eritreans face torture, extortion, and rape at the hands of traffickers—at times with the collusion of police and military, Human Rights Watch reports (PDF). From Sinai, they cross into Israel, where some thirty-three thousand Eritreans reside, the country's interior ministry said in August 2015. Israel has turned back nearly three thousand people to Eritrea and third countries.

What are the EU and U.S. policies toward Eritrea and Eritrean asylum seekers?

Eritreans have prima facie designations from the UN refugee agency, meaning they are presumed to have legitimate asylum claims, a policy that most European governments have adopted. Eritrea denounced the designation, saying it misrepresented national service as forced labor and made the UN an "unwitting catalyst" of the exodus, putting it in league with the country's adversaries.

"In refugee law, it can be tricky to draw the line between an economic migrant and someone who is fleeing persecution," says Felix Horne, a researcher at Human Rights Watch. "Eritrea is the best example of that," he says, noting cases of minors who have fled the country. Many are anticipating conscription, though they have not yet served. They raise the question of whether they are fleeing the abuses of forced labor, or an apparent lack of work opportunities outside of the national-service program.

Amid a broader backlash to mass migration, some countries are moving away from the prima facie status for Eritreans. Denmark and the UK have cited the Eritrean government's recent promises that it will limit the duration of the national service. "Nothing has changed on the ground," says Gaim Kibreab, of London South Bank University. "Europe will be better off adopting evidence-based policies."

U.S. refugee policy prioritizes those Eritreans seeking protection on the basis of religious persecution. In its October 2015 report to Congress, the Obama administration called attention to what it says is Eritrea's repression of those subscribing to evangelical sects, as well as government control of state-sanctioned Christian and Muslim denominations. In all, the United States admitted 1,488 Eritreans in FY 2015, just over 2 percent of its total refugee admissions.

The EU is reportedly considering a five-year aid program worth 200 million euros ($214 million). By easing Eritreans' economic plight at home, it hopes to reduce the migrant and refugee outflow toward Europe. Meanwhile, some Africa experts call for ending Eritrea's isolation, which they believe could allay the ruling party's sense of siege and begin a process toward domestic reforms. Others point to normalization of Ethiopia-Eritrea relations as a way to provide both countries with savings to transfer to domestic spending.