Finland and the Bear 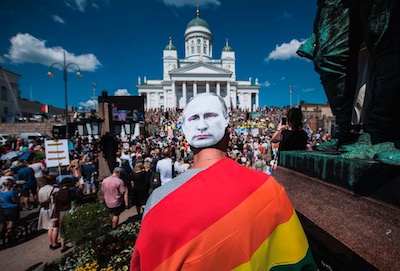 A demonstrator wears a mask bearing a portrait of Russian President Vladimir Putin as protesters gather for a march to defend human rights, freedom of speech, and democracy on July 15, ahead of U.S. President Donald Trump's meeting with Putin in Helsinki. (Jonathan Nackstrand/AFP)

Americans who are wringing their hands over their country’s complicated relationship with Russia are not alone these days.

Some Finns are doing so as well.

The summit meeting earlier this month in Helsinki between Presidents Donald Trump and Vladimir Putin resurfaced some old fears here about Russian meddling in Finish politics—a phenomenon that even has a name dating back to the Cold War: Finlandization.

It also served as a reminder that—alongside the fears—many Finns have a soft spot for all things Russian.

Both sides took the streets around the summit. “We don’t want your bloody war,” a few hundred Kremlin critics chanted in Helsinki’s city center, referring to both Russian and U.S. involvement in conflicts around the world. “Lock up Putin for life,” one sign said.

In the pro-Kremlin camp, there were calls to name a street after Putin and another one after Trump—this group seems to like Trump’s populism as much as it admires Putin’s authoritarianism.

For decades, Finland has managed to walk the finest of lines between Europe and Russia—with which it shares an 833-mile border. Helsinki cooperates with NATO but has pointedly stopped short of full membership in the alliance, with only about 22 percent of the population supporting joining NATO. It has maintained good relations with Moscow even as it backed Western economic sanctions against Russia over Crimea.

But the middle road has become more treacherous lately. The Crimea war reminded Finns that Moscow has at times viewed their country—not just Ukraine—as part of the greater Russian homeland. Thousands of Finns have Russian citizenship, stirring fears that, in a conflict, some might show more loyalty to Moscow than Helsinki. A few political provocateurs have stoked those fears with inflammatory rhetoric.

Johan Backman, one of Finland’s most incendiary pro-Russia activists, has led the charge. In a political stunt that drew much attention last year, he opened what he called a “representative office” in Helsinki for the Donetsk People’s Republic—the breakaway Ukrainian territory.

The participants at the opening ceremony included Finnish activists who worked for the administration of the self-proclaimed Donetsk Republic during the bloodiest days of the war. Ukraine has branded the breakaway party a terrorist group, and the European Union—including Finland—has sanctioned its leaders.

In a Norwegian documentary called The Spokesman, Backman accused the United States of “attacking Russia through Ukraine by organizing the Orange Revolution in 2004.” He has referred to leaders of Ukraine’s pro-European revolution as “a fascist clique,” echoing Russia’s line, and described the Baltic countries of Estonia and Latvia as “extremist, nationalist, chauvinist.”

Backman has also appeared onstage alongside the Russian nationalist ideologue Alexander Dugin, who likes to remind Russia’s neighbors that the old empire used to be much bigger than modern Russia. In May 2014, the two men spoke in Helsinki about Russia and Finland moving closer together.

“Both for Russia and Finland, it would be interesting to grow closer—that is why all initiatives, especially from the Finnish side, so we are not suspected of imperialism, will be considered very attentively in Moscow. I will be the first one to support them,” Dugin said.

Most Finns remain cold to this pro-Russian sentiment and skeptical about Putin. In a recent poll, just 2 percent of respondents said they believed Putin was making the world a safer place.

As for the Russia advocates, a growing number of Finns see them as a threat.

“We know of several of Putin’s close friends living in Finland; some have both Russian and Finnish citizenship. If a conflict similar to Ukraine’s occurs on our border, I am not 100 percent sure that we can trust these citizens,” said Eilina Gusatinsky, who heads the Cultura Foundation and is one of the country’s leading experts on Russian-Finnish relations.

One concern expressed regularly over the past year is that Moscow has planted agents among the dual citizens who could penetrate Finland’s political and security institutions. Finnish Defense Minister Jussi Niinisto has said that Finns who hold Russian citizenship should not have jobs that expose them to state security issues.

“It is important for Finland to identify Kremlin agents, but the task is not easy because there are many pure Finns who are for some reason admiring Russia … and we of course do not know if they are doing it as volunteers or if they are paid by Russia,” said another Russia expert in Helsinki, Arja Paananen, a correspondent for the Finnish newspaper Ilta-Sanomat.

Whether the fears are grounded in any real threat remains difficult to establish. A few years ago, the newspaper Helsingin Sanomat looked into the affiliations some dual citizens had with the Kremlin but could draw no definitive conclusions.

“So even calling them ‘Kremlin agents’ is problematic. They might not have any official connection to Russian authorities, but for some reason they are behaving just the way the Kremlin likes them to do,” Paananen said.