It’s Time for a Coup in Venezuela 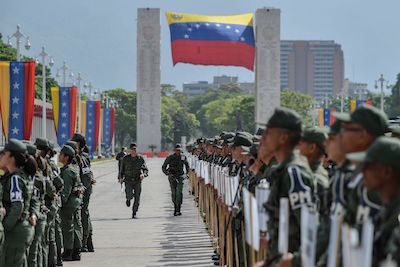 Venezuelan National Guard personnel take part in the launching ceremony of the "Plan Republica", the security operation for the presidential election on May 20, in Caracas, on May 15, 2018. (Photo by Luis ROBAYO / AFP) (Photo credit should read LUIS ROBAYO/AFP/Getty Images)

Now that Venezuelan autocrat Nicolás Maduro has engineered his re-election in what reasonable observers have decried as a sham vote, it’s impossible to say how long he will remain in office. But the United States and its allies should lay the groundwork for the remaining portions of the Venezuelan government not beholden to Maduro to take the choice out of his hands.

Nearly two decades of creeping authoritarianism and large-scale economic mismanagement have taken a staggering toll on Venezuelans. Moreover, with reports of low voter turnout in an otherwise stage-managed electoral process and rising military dissension, clearly the Maduro regime is “taking on water,” as Juan Cruz, the National Security Council’s senior director for Western Hemisphere affairs, said in May at a panel discussion hosted by the Council of the Americas.

But if time is running out, it’s less clear exactly for whom: the Maduro regime or those struggling for a restoration of democracy in that benighted country? After all, Cuba — which serves as Maduro’s ideological mentor — has demonstrated that a strategy of forcing out the discontented and subjugating the rest, while muddling along with a dysfunctional economy, can sustain an authoritarian regime for decades.

The question thus becomes, as the New York Times editorial board wrote, “how to get rid of Mr. Maduro before he completes the destruction of his country.”

First, we should recognize that dialogue or diplomacy cannot bring a resolution to the Venezuela crisis. By now, it’s evident that the Maduro regime has no intention of negotiating itself out of power and only sees such opportunities as maneuvers to buy time.

Second, we must admit that the only institution capable of instigating a real political transition in Venezuela is the Venezuelan military. As the Economist put it, “[Maduro’s] future will be decided by the armed forces, not directly by the people. If they withdraw support from his beleaguered regime, change will come soon. If not, hunger and repression will continue.”

Of course, no one wants to see a regression to a Latin American Dark Age, in which military coups are the norm, at the expense of civilian rule and democracy. But it is important to note that identifying the Venezuelan military as the only logical change agent is not to advocate for a coup. The fact is, a coup has already taken place — perpetrated by Maduro and his Cuban advisors against the country’s constitution. Only nationalists in the military can restore a legitimate constitutional democracy.

It may be that the senior officer corps has been replaced by regime cronies and those complicit in drug trafficking, but the armed forces are not monolithic. Many in the rank and file are suffering the same deprivations as the general population, even as corrupt generals are getting richer and richer. Something has to break.

That leaves the United States and democracy’s allies abroad to convince those uncorrupted elements of the Venezuelan military that they bear a unique responsibility to rescue their country from the abyss, uphold constitutional order, fulfill their oaths to defend the lives of every Venezuelan, and open a path to their country’s political, economic, and social reconstruction.

Certainly, expecting a faction of the military to depose the current regime and restore democracy entails risk — but it is a measure of the desperate straits in which Venezuela finds itself.

Ideally, Cuba could offer asylum to current regime leaders and other malefactors while the faction that took power could call new elections within a year. (Given that Latin American militaries traded in presidential palaces for the barracks years ago, it is unlikely that a military faction would seek to govern permanently; besides, it is not at all clear it would want to own the country’s economic predicament.)

The Trump administration is certainly doing its part to delegitimize the Maduro regime, sanctioning some 70 Venezuelan officials and issuing a series of executive orders tightening the economic screws on the Maduro regime. It has also been clear that many more such measures are in the pipeline. Next, it should move aggressively to sanction more Venezuelan officials throughout the government and military.

Violators of democratic norms and human rights, especially lower-echelon officials, may not feel the impact of denied U.S. visas or prohibitions against accessing the U.S. financial system. However, international sanctions are a powerful stigma and eliminate the anonymity behind which such individuals typically hide. Exposing their names and faces at home and internationally will force officials at all levels to consider the legal and reputational repercussions before continuing to participate in undemocratic actions or the use of violence against their fellow citizens.

The Trump administration should also create an interagency strategic communications task force on Venezuela, with the express purpose of targeting audiences inside Venezuela with evidence in U.S. possession of the depths of criminality and corruption in the regime’s ranks. Millions of Venezuelans once placed their good faith in the chavistaproject because they were told the country’s oil wealth would be shared more equitably. Today, they are ruled by nothing less than a criminal conspiracy more interested in protecting their ill-gotten offshore accounts than the welfare of the millions of Venezuelans it once promised to represent.

Regional governments must also get more active. To their credit, some have, but they need to do much more. They would do well to follow Panama’s lead in moving beyond rhetoric to ban commercial ties with Venezuelan individuals and companies the Panamanian government designated as “high risk” for money laundering and financing terrorism. In addition, they should ban high-ranking Venezuelan officials from traveling to their countries on government business or for shopping sprees or from sending their children abroad to be educated.

More aggressively disseminating evidence of the current regime’s betrayal of the Venezuelan people, combined with the threat of continually expanding sanctions against government officials who lend their efforts to the repression, is likely the best bet to catalyze positive developments within Venezuela.

There are no guarantees, of course, but that is no excuse for complacency. The worst option is to allow the consolidation of another repressive, authoritarian regime in the hemisphere, which would truly herald a return to a Dark Age in the Americas. That all the major governments in the region have recognized this — if fitfully at times — is an important development. But it’s time to take it to the next level. Diplomatic and economic isolation is a powerful tool, especially in the Americas, where countries are loath to appear out of step with one another. It is also a powerful tool to concentrate the minds of Venezuelan patriots, who are in a unique position to do something to rectify the situation.