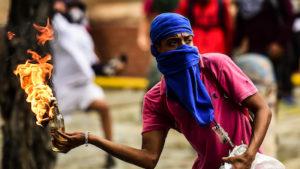 After months of violence and anti-government protests, Venezuela is approaching the political precipice. President Nicolás Maduro’s push toward autocratic rule culminates on July 30, with the planned election of a constituent assembly to rewrite the country’s constitution. And while there is still time to change course, the path back toward democracy is quickly fading from view.

In May, when Maduro announced his plan to establish a constituent assembly, he presented it as a way to restore confidence in his government, which has struggled to recover from economic decline amid collapsing oil prices. But as the vote has drawn closer, it has become clear that Maduro’s intent has always been to consolidate his power, and impose on Venezuela’s 31 million people an authoritarian, pseudo-socialist system. By rigging the vote with handpicked candidates, the president appears willing to use any means to maintain power.

The world got a taste of Maduro’s true aims earlier this month. On July 5, government- backed paramilitary forces, in collusion with the National Guard, attacked the opposition-controlled National Assembly. For six hours, politicians and employees were held at gunpoint; one hostage, Assembly President Julio Borges, described the siege as evidence of the country’s descent into complete “anarchy.”

That brazen assault preceded a national referendum, organized by opposition parties, to gauge support for Maduro’s plan to redraft the constitution. If the prevailing sentiment wasn’t clear to the president before the July 16 plebiscite, it was after: more than seven million people participated, with an astonishing 98% rejecting the proposal – a clear repudiation of Maduro’s government.

To carry out the plebiscite, Mesa de la Unidad Democrática (MUD), the opposition’s umbrella organization, activated a network of voting centers, operating with full transparency, in just a few days. And by holding the referendum, MUD has managed, with one vote, to do what Maduro has failed to do during his entire presidency: unite the country.

In contrast to government-organized electoral initiatives, every Venezuelan, regardless of political affiliation, was invited to participate and express their views. For those of us who observed the voting, it was a reminder that, while Venezuela is currently being mismanaged, the public remains prepared to fight for their country and its democratic institutions.

MUD’s referendum set the stage for the crisis that will come to a head this week. Opposition groups and protesters are boycotting the constituent assembly election, but the consolidation of presidential power that Maduro is seeking will not be the only issue on their minds. Protesters are also calling on the government to release political prisoners, uphold the current constitution, and establish a government of national unity to restore economic and political stability.

Given the stakes, it is no surprise that the Maduro government immediately sought to discredit the July 16 referendum. Votes were still being counted when the head of the National Electoral Council, Tibisay Lucena, dismissed the process as invalid and legally irrelevant.

But just as the attack on the National Assembly failed to quell public anger, so, too, will the government’s dismissal of the referendum’s results. Venezuelans’ preferred option is to move ahead peacefully, along the lines proposed last year by the Vatican, which called for early presidential elections, a more autonomous parliament, and other measures. For its part, the National Assembly has already begun to put together a precise roadmap for implementing similar demands endorsed in the July 16 referendum.

Moreover, Maduro faces mounting pressure to cancel the constituent assembly election. Colombia, France, Spain, the European Union, and the United States have called on him to back down, and US President Donald Trump has threatened new sanctions if the voting goes ahead. The solidarity is welcome, but it will not be enough to alter the current trajectory. More regional pressure is needed – and quickly – if further violent disorder is to be averted.

The regime can still stop Venezuela’s downward spiral, and Venezuelans have shown clearly that they are determined to fight for their country’s future. To ensure a return to democracy in Venezuela, the international community must stand up as well.