What China Owes a Bygone Era 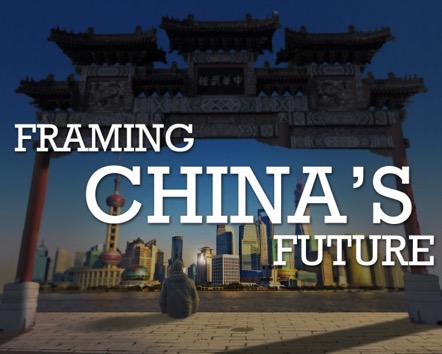 Since the end of the Cold War, international politics has been defined by the rise of universal human rights as norms. The leading world power, the United States, has used human rights rhetoric to pursue its global interests, citing it in plans to intervene in Kosovo, to overthrow Iraq's Saddam Hussein and to pursue efforts against the Syrian government of Bashar al Assad. There are, however, dissenters to the notion of human rights as currently understood by international bodies. Chief among these is China, which champions national sovereignty over universal human rights. Indeed, Beijing's opposition to meddling in the domestic affairs of sovereign nations has been a key part of its foreign policy over the past several years. Former Chinese President Hu Jintao even adopted what was termed "China's peaceful development" as an official policy — the idea that unlike past great powers, China will reject imperialism and respect sovereign rights as it rises.

China's focus on the unassailability of sovereign rights partly reflects the lessons of recent history and the nation's peculiar role in today's international balance of power. The Soviet Union's collapse in 1991 kicked off the "fourth wave" of democratization, which, coupled with staunch Western support for pro-democracy movements, brought about regime change in numerous nations. But this process also left China, an authoritarian one-party state, an outlier among the world's leading countries. Beijing suddenly found itself on the defensive in the increasingly frequent discussions on the widely shared ideals of democracy, freedom of expression and human rights. During this same period, China's economic growth exploded, catapulting it to its current position as the second-largest economy and the second-most powerful player in the international system. Beijing is now seen as Washington's key rival, especially in the Pacific Rim. Embattled by human rights rhetoric and U.S. efforts to limit its rise, China has clung to a framework of inviolable sovereignty and has opposed interventionism.

But China's obsession with sovereignty has deeper roots that reach back to the nation's colonial experience. The United States, with its unparalleled geopolitical position, has been able to largely take security from foreign intervention for granted since the end of the War of 1812. Nineteenth-century China, by contrast, was defined by subjugation from the First Opium War (1839-1842) onward. The government at the time, the Qing dynasty, fought constantly to regain China's right to govern itself. This period, from 1839 to 1949, is known in China as the "century of humiliation" and was characterized by repeated military defeats, imperial decay and untold human suffering. For the Chinese, those years have long represented a momentous tragedy: the loss of China's right to sovereignty. Over the course of a few generations, China fell from the top to the bottom of the international order. In the process, it ceded effective control over large swaths of territory to countries it had formerly regarded with condescension, including Japan and the United Kingdom. This memory of humiliation was what made it so powerful when Mao Zedong proclaimed in September 1949 that "the Chinese people, comprising one quarter of humanity, have now stood up."

Whereas Mao's contribution to modern China is universally understood, the Qing dynasty's  contribution receives far less attention. When the period is mentioned it is in negative terms — the dynasty is often offered as the counterexample to the dynamic modernism of the Communists and nationalists. But the Qing played a pivotal role in contemporary understandings both of what constitutes China and what it means to belong to the Chinese nation. The dynasty ruled from 1644 to 1912 and built an empire they called Zhongguo, meaning the central kingdom. The dynasty's founders, ethnically Manchu, are today often regarded as the outsiders against which Han identity formed, but they were actually crucial to making China the multiethnic nation it is today.

The Qing legacy is most readily apparent in the current extent of Chinese territory. Without the Qing, the nation would be far smaller. China under the Qing nearly doubled in size from what it had been under the Ming dynasty (1368-1644), and it even expanded to include territory beyond the borders of modern China, including much of Mongolia, Taiwan, parts of Siberia and Kazakhstan as well as the borderlands of Myanmar and Thailand. Were it not for the Qing, Beijing would not have control over Tibet, Xinjiang, Inner Mongolia, much of Manchuria or  perhaps even large swaths of southwestern Chinese provinces such as Sichuan and Yunnan. This dramatic expansion was due to the Qing's origins in the Manchurian highlands and steppe, which made them skilled at gaining and retaining territory in regions once off-limits to Chinese dynasties, namely in Mongolia and Central Asia. Manchu cultural ties with groups along China's northern and northwestern frontier also assisted. The Qing accomplished feats that would have been unthinkable for the rulers from the sedentary population of China's Han core, who had never managed to conquer the buffer regions crucial to protecting the heartland. 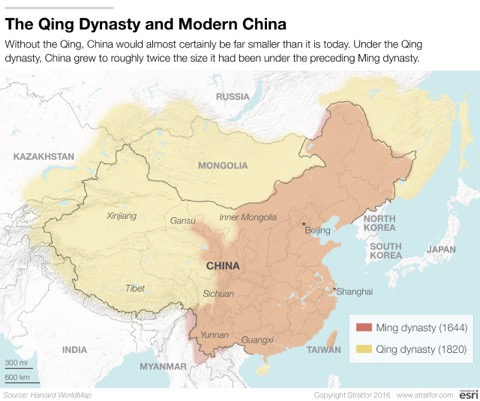 Qing territorial expansion also brought other changes important for China's current trajectory, the first of which was demographic. China's population across the nation exploded in the 18th and 19th centuries, but nowhere did it rise as sharply as in regions such as Sichuan, Chongqing, Yunnan, Guangxi and Gansu. These areas had been sparsely inhabited before the Qing, but their populations grew as provinces such as Sichuan became staging grounds for military expeditions into Tibet. Economic and demographic changes in core regions including the Yangtze River Delta also pushed people into the hinterlands. The settlement of the frontier left another enduring legacy: an expanded state that could mobilize resources and manage trade between regions.

Pushing into the frontier regions brought the Qing in contact with contemporary powers, such as Russia, that were simultaneously expanding across Eurasia. These early interactions with Russia introduced China to the concept of Western-style territorial sovereignty. Just as in pre-modern Europe, Chinese ideas of sovereignty did not include well-defined borders. Instead, the Chinese imagined power over territory in terms of concentric circles of influence, known elsewhere as the Mandala system. The circles centered on the emperor himself and extended outward in rings, the emperor's power waning the farther out they went; sometimes these rings even overlapped with the influence of neighboring rulers. This left large chunks of territory in a gray zone of partial Chinese dominion. This conception of sovereignty faded beginning in the 18th century when China began to compete with Russia for influence in Central and Northern Asia, a contest that gave rise to fixed borders and modern European concepts of unbroken territorial sovereignty.

But the Qing period also left an indelible mark on the Chinese national identity, one that is often quite misunderstood. Usually the legacy of the ethnic Manchu Qing dynasty is seen as defining the Han Chinese identity through opposition. This has some basis in history. The end of the 19th century and the loss of the 1895 Sino-Japanese War mobilized Han Chinese nationalism against the alien dynasty.

But this obscures the origins of the Han identity. As historians such as G. Patterson Giersch have shown, the Han did not have a coherent ethnic identity before the 19th century, much less a solid national identity. Instead, the people inhabiting China thought of themselves primarily in regional or local terms. In fact, the roots of the idea of a distinctive Han identity can be found in the settlement of the frontier during the Qing dynasty period. As people migrated from core regions to frontier territories, they began to encounter ethnic minority groups such as the Miao and Hui. It was in opposition to these minorities, arguably prior to the Manchu, that the Han became the Han. This is further demonstrated by the fact that nearly all the major rebellions against Qing rule (most notably the Miao and Hui revolts and the devastating Taiping Rebellion) began in frontier areas as responses to Han migration. None began as primarily Han struggles against the Manchu.

The Qing legacy is also one of a national Chinese identity defined by the state's territory rather than by ethnic affiliation. Soon after the 1949 founding of the People's Republic, the nation's leaders realized that defining China and Chinese nationalism in terms of Han identity was useful only for mobilizing people from the heartland but not the ethnic minorities within China's borders. These leaders turned to the Qing example. In the 18th century, the dynasty had brought back the ancient concept of Zhongguo — the central or middle kingdom — in an effort to legitimize its rule over an expanding and increasingly diverse empire. China's post-war leaders — and its current rulers — followed suit, emphasizing the use of terms such as Zhongguo Hua, meaning language of the central kingdom, rather than Hanyu, language of the Han, to describe the Chinese language. This has not been unambiguously successful — Han nationalism exists and is still quite strong. But it was the Qing who made such a conception of China possible by both massively expanding the frontiers and by formulating the concepts the government cleaves to today.

The Qing dynasty's varied legacies continue to influence Beijing's actions and inform how the nation's leaders choose to navigate China's path to great power status. The focuses of the current push to manage ethnic tension in regions such as Xinjiang and to integrate the nation's vast borderlands with the developed core come straight out of the Qing playbook: development, infrastructure, internal migration and education. The dynasty's massive expansion and humiliating fall also provide a note of caution for today's Communist Party leaders, cementing their commitment to sovereignty and to the principle of nonintervention in the domestic affairs of other states.