ISIS (2): How the Islamic State Seized a Chemical Weapons Stockpile

When jihadists captured a Syrian military base, they found a cache of some of the world’s most dangerous weapons buried in its bunkers. In Part II of an exclusive series, an Islamic State member explains how they eventually fell into the hands of the self-styled “caliphate.”

Since its creation, we have learned about the Islamic State from its enemies. Its story has largely been told by those fighting the group in Iraq and Syria, traumatized civilians who have escaped its brutal rule, and the occasional defector. That is about to change. This is the story of Abu Ahmad, a Syrian operative for the Islamic State who witnessed the group’s lightning expansion firsthand and spent months among its most notorious foreign fighters.

In this series of three articles, he provides unique insight into how Abu Bakr al-Baghdadi’s political scheming paved the way for its expansion into Syria, al Qaeda’s efforts to stem the group’s rise, and the terrifying weapons in the arsenal of the self-proclaimed “caliphate.” Some names and details have been omitted to protect Abu Ahmad.

Abu Ahmed told us how the Islamic State of Iraq and the Levant (ISIS) came to acquire some of the world’s most fearsome weapons, which were claimed as spoils of war from Syrian President Bashar al-Assad’s forces months before its creation.

Roughly four months before the split between the Nusra Front and ISIS, in December 2012, dozens of Syrian jihadi fighters climbed a hill toward Regiment 111 — a large army base near the town of Darat Izza, in northern Syria. That town had been taken roughly five months earlier by a coalition of rebel groups. But while they had besieged Regiment 111 since the summer of 2012, they still had not succeeded in capturing the base from the troops loyal to President Assad.

The weather had turned bad in winter, however, making it more difficult for the Syrian Air Force to hold off the rebels with airstrikes. Moreover, the base was huge, sprawling over almost 500 acres, and difficult to protect from all approaches.

Syrian Army soldiers inside Regiment 111 successfully defended their base during the first rebel attack in early November 2012, killing 18 Nusra fighters in the process. But the cold December wind only fortified the rebels’ resolve. The base was a goldmine: home to guns, artillery, ammunition, and vehicles. And deep inside Regiment 111’s bunkers lay something even more valuable — a cache of chemical weapons. 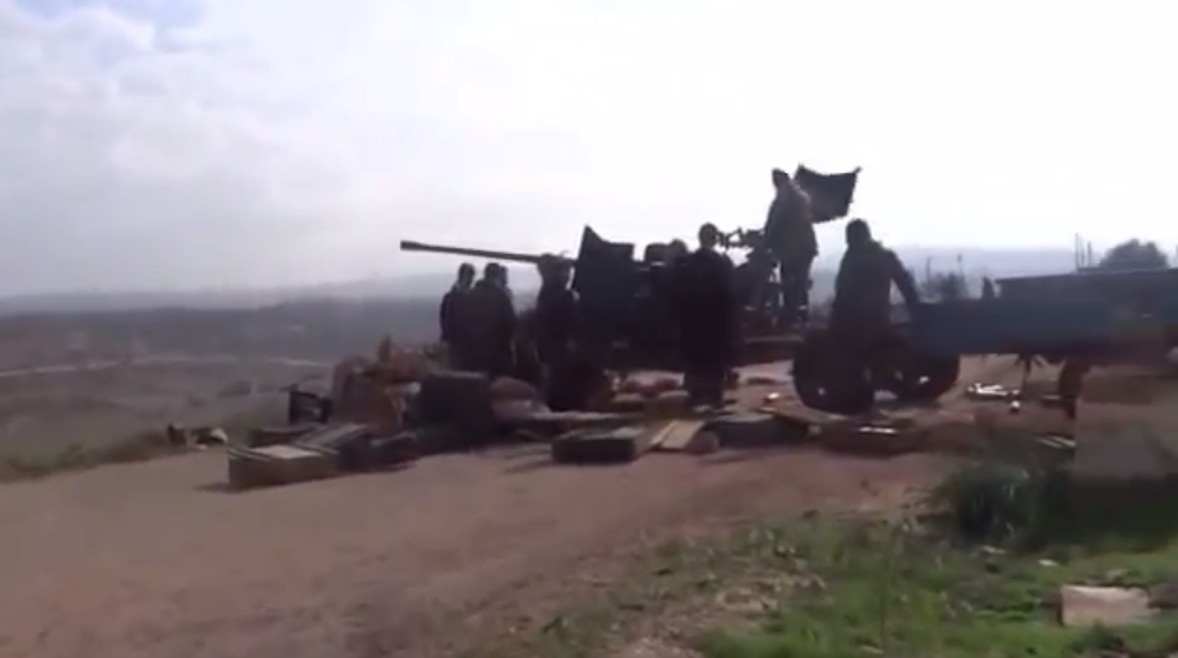 Jihadists looting the weapons stockpiles in the Syrian army base known as Regiment 111, shown here in a still shot taken from a video posted online.

The attack was led by the Nusra Front and supported mainly by Kataib Muhajiri al-Sham, a unit within Liwa al-Islam; Majlis Shura al-Mujahideen; and Katibat al-Battar, which consisted largely of Libyan jihadis. The fighters knew that the base possessed ammunition and other weapons, but did not know in advance it contained chemical weapons.

As the rebels climbed the hills near Regiment 111, intense fighting erupted. “That day, all of us were full of excitement and revenge,” Abu Ahmad told us. “Everybody wanted to avenge the 18 Nusra brothers who were martyred during the first attack.  People were screaming: ‘This time we will conquer it!’”

Within a day, the combined jihadi forces had broken through the lines of the Syrian Army. Shortly after, Regiment 111 was fully under jihadi control. They found large stocks of weapons, ammunition and, to their surprise, chemical agents. They were, according to Abu Ahmad, mainly barrels filled with chlorine, sarin, and mustard gas.

What followed was the distribution of the war spoils. Everybody took some ammunition and weapons. But only the Nusra Front seized the chemical weapons. Abu Ahmad watched as the al Qaeda affiliate called in 10 large cargo trucks, loaded 15 containers with chlorine and sarin gas, and drove them away to an unknown destination. He did not see what happened to the mustard gas.

Three months later, both the Syrian government and rebel groups reported an attack in Khan al-Assal, near Aleppo. The international media said that 26 people had been killed, among them 16 regime soldiers and 10 civilians. Both the Syrian regime and opposition claimed that chemical weapons had been used — and both accused the other of having carried out one of the first chemical weapons attacks in the Syrian war.

Abu Ahmad kept his mouth shut in public, but privately he and some of his Syrian jihadi comrades discussed the matter. Although they did not have any evidence, they wondered whether the material used in the Khan al-Assal attack had been taken from Regiment 111. He knew he couldn’t ask Abu al-Atheer for clarification. By now he had learned one of the golden rules of the secretive jihadi movement: When it’s none of your business, keep quiet.

“Among our people, it is not done to ask,” Abu Ahmad told us.

Dutch-Turkish jihadi Salih Yilmaz justifies the use of chemical weapons in response to a question posed to him on his blog and responds to a critique of the Islamic State by saying the jihadist group seized its chemical weapons stockpiles from its opponents.

That would be the end of the issue for the next eight months. Beginning in April 2013, Abu Ahmad and his comrades would be preoccupied with Abu Bakr al-Baghdadi’s expansion into Syria, and the escalating tensions between the newly-created ISIS and the Nusra Front. It was a confused time in the Syrian jihadi world: Many factions within the Nusra Front were breaking off to join ISIS, while the al Qaeda affiliate worked feverishly to maintain loyalty within its ranks. Territory, bases, and weapons were up for grabs like never before.

But in mid-August 2013, Abu Ahmed received news that made him think that ISIS had emerged from the split with the Nusra Front in possession of the chemical weapons seized at Regiment 111 — and that it was now using them against its enemies.

Out of the blue, Abu al-Atheer, the man to whom Abu Ahmed had pledged loyalty — and who had in turn pledged loyalty directly to Baghdadi — told his own commanders that ISIS had twice used chemicals during attacks against the Syrian Army. The announcement came during a normal conversation between Abu al-Atheer and his men; the ISIS commander told the story happily and proudly.

“The brothers sent a car bomb with chemicals to a [Syrian Army] checkpoint near al-Hamra village in Hama,” Abu al-Atheer claimed, as they sat in their headquarters.

Al-Hamra is located roughly 20 miles northeast of the city of Hama. It is still controlled by forces loyal to the Syrian government.

Abu al-Atheer spoke of another ISIS chemical attack. “We also used one car bomb filled with chemicals against regime forces near to Menagh Airbase,” he said. Menagh Airbase is located roughly 20 miles north of Aleppo. After a year-long siege, on Aug. 5, 2013, Menagh Airbase was eventually overrun by jihadis led by ISIS.

Again, Abu Ahmed thought back to that cold December day when jihadi fighters overran Regiment 111. Were these the same chemical weapons that he and his comrades had found stockpiled in the base back then?

Whether they are or not, the Islamic State appears to still have these weapons in their arsenal. More than two years later, on Oct. 6, 2015, the New York Times published an article describing how the Islamic State used chemical weapons against moderate rebel fighters in the northern town of Marea. According to The Times, the group fired projectiles that delivered “sulfur mustard.” This substance is more commonly known as mustard gas.

The Dutch-Turkish jihadi Salih Yilmaz, a former soldier in the Dutch Army who has joined IS, admitted on Aug. 31, 2015, on his now defunct blog that Islamic State indeed used chemical weapons there. Yilmaz was asked by a reader of his blog “why did they accuse [the Islamic State] of recently using chemical weapons in Aleppo province?”

Yilmaz responded by writing: “Where do you think IS got their chemical weapons from? From our enemies — and thus we use their own weapons against them.”