Russia and the West (V): Central Asia, a Different Kind of Threat

Much like the Caucasus, Central Asia serves as a relatively new but no less important staging ground for the ongoing competition between Russia and the West. Since the fall of the Soviet Union, the region has been somewhat of a melange of indecision and opportunism: Kazakhstan has stayed close with Russia, while Uzbekistan and Turkmenistan have stayed relatively neutral. Kyrgyzstan and Tajikistan, on the other hand, have had difficulty settling on which foreign patron to support as violent upheavals have swung their foreign policies back and forth.

Over the coming decades, instability and internal conflict will continue to pose the greatest threats to the region as the influence of Russia and the West in Central Asia fades. But in their place, two new powers will rise that will shape the future of the region: Turkey and China.

Throughout history, powerful empires, including Persian, Mongol and Turkish empires, have fought to control Central Asia. Russia did not join the fray until the late 18th century. When it did, its expansion into the region was gradual, starting in the area that is now Kazakhstan. From there, it slowly penetrated southward into modern-day Uzbekistan, Turkmenistan, Kyrgyzstan and Tajikistan.

The Russian Empire's initial forays into Central Asia coincided with the British Empire's expansion into the Indian subcontinent, giving rise to what would be known as the Great Game, a long-running battle for regional control. Imperial Russia wanted an outlet to the sea and a buffer between potentially hostile powers in Asia, be they indigenous peoples or imperial armies. Afghanistan would later become just that, separating the Russian and British empires and eventually playing an important role in subsequent conflicts between Russia and the West in Central Asia. 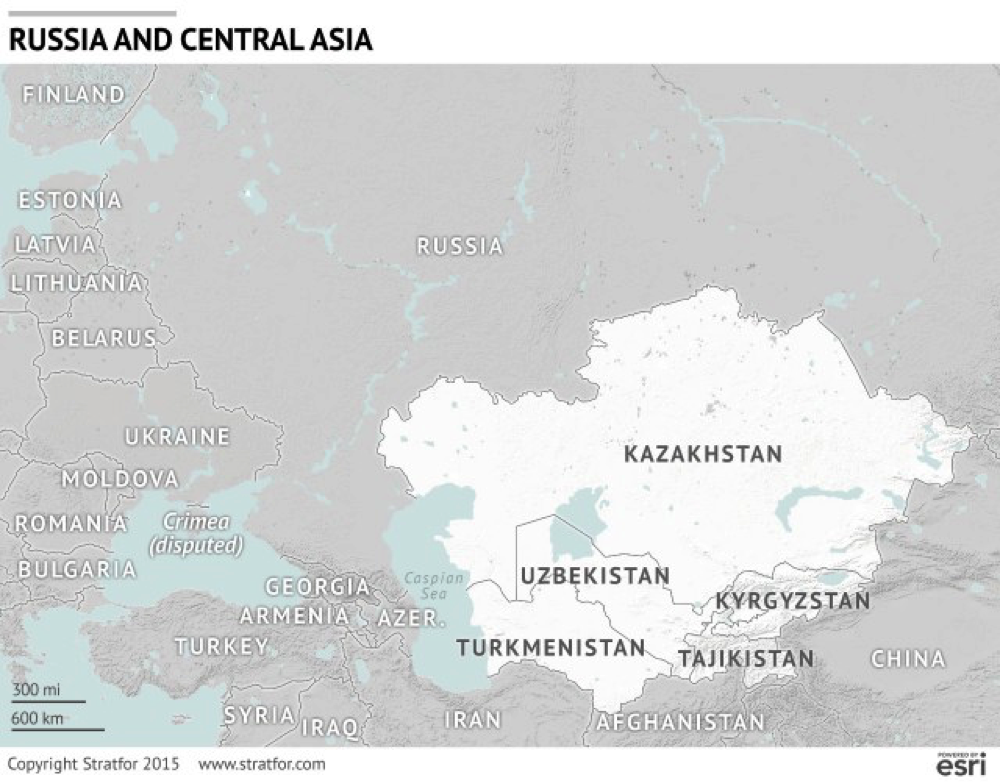 Though the Russian Empire's collapse in 1917 led to a brief and unstable period of independence in Central Asia, its Soviet successor would once again pull the region into its orbit in the following decade. Soviet rule dramatically changed the politics of Central Asia. Peoples from other parts of the Soviet bloc were forced to resettle throughout the region, while Russification programs emphasized the adoption of Russian language and customs. Central Asia became closed off to the West and to the Muslim states surrounding it, including Turkey, Iran and Afghanistan.

However, the Soviet invasion of Afghanistan in 1979 accelerated the bloc's undoing and gave the West the upper hand in the Cold War. Substantial support from the West, especially the United States, enabled the Afghan mujahideen to counter the Soviet military's efforts to prop up the communist government in Kabul. This exposed the Soviet Union's military weakness and drained its economic and political resources, reducing Moscow's ability to continue contending with the West on a global scale.

The Past 25 Years: The Afghan Conflict Creates Volatility

After the collapse of the Soviet Union, each of the five Central Asian states — Kazakhstan, Uzbekistan, Turkmenistan, Kyrgyzstan and Tajikistan — gained their independence. With the exception of Tajikistan, which descended into a chaotic civil war almost immediately, all installed their former Communist Party secretaries as their new presidents.

In Kazakhstan and Uzbekistan, Central Asia's two largest states, these presidents have remained in power at the head of highly centralized political systems ever since. Under President Nursultan Nazarbayev, Kazakhstan has maintained a close relationship with Russia by joining the Moscow-led Customs Union (now the Eurasian Union) and the Collective Security Treaty Organization military alliance. Though it has relied on the West to develop its large oil and natural gas resources, Kazakhstan has remained tied to Russia strategically. Uzbekistan, however, has remained neutralunder President Islam Karimov's rule, eschewing alliances with both Russia and the West. While it did host U.S. and NATO military bases for a time during the West's war in Afghanistan, it later closed them after the West raised concerns over human rights abuses. Uzbekistan has also retained close economic ties with Russia but has avoided participating in Moscow-led integration projects.

Like Uzbekistan, Turkmenistan has attempted to keep its distance from both Russia and the West. President Gurbanguly Berdimukhammedov has maintained his predecessor's isolationist policies, keeping power highly centralized under his office. Though Turkmenistan initially sent most of its considerable natural gas output to Russia, in recent years it has rerouted much of its supplies to China amid a steep drop in Russian imports. Meanwhile, Turkmenistan continues to explore other export options, including the Trans-Caspian and TAPI pipelines to Europe and South Asia. In the wake of the crisis in Ukraine, Europe has been particularly interested in courting Turkmenistan as an alternative natural gas supplier to Russia, though the Kremlin has so far been successful in halting projects that would send Turkmen natural gas to the Continent. Now approached by the West, Russia and China, Turkmenistan continues to seek a balance between all three without formally aligning with any of them.

Unlike their other Central Asian neighbors, Kyrgyzstan and Tajikistan have been politically unstable since the fall of the Soviet Union. In Kyrgyzstan, revolutions took place in 2005 and 2010; the first brought to power an administration friendly with the West and the second replaced that government with one that favors Russia. Since then, Kyrgyzstan has strengthened its ties to the Kremlin, joining the Eurasian Union and allowing Russia to expand its military presence in the country while expelling the United States from the Manas air base in 2014. In Tajikistan, civil war raged from 1992 to 1997, when the pro-Russia faction led by President Emomali Rakhmon emerged victorious. Rakhmon has ruled the country ever since, pulling it closer to Russia, particularly in terms of security and military cooperation.

Along with each country's unique circumstances, the evolution of Russia's relationship with the West in Afghanistan has shaped the rivalry in Central Asia. At the start of the U.S. invasion and during NATO's occupation of Afghanistan in the early 2000s, both sides cooperated extensively. In fact, Russia brokered access to strategic military bases and lines of supply in Central Asia on behalf of U.S. and Western forces. But as the war dragged on, Moscow grew fearful of the West's intention to maintain a long-term military presence in the region, potentially challenging Russia's role as a regional heavyweight. Central Asian states then evicted Western forces from their bases and severed their supply routes. Now, with the Taliban and the Islamic State gaining strength in Afghanistan, Russia and the United States are lobbying for competing border security initiatives with the countries of Central Asia.

The Next 25 Years: Other Powers Overtake Russia and the West

While such population growth is normally conducive to economic growth and military strength, it will occur in Central Asia at a time when the region's resources, including water and food, are already strained. The population explosion will hit hardest in the Fergana Valley, which is the region's demographic core and is shared by Uzbekistan, Kyrgyzstan and Tajikistan. There, the Soviets designed convoluted borders to intentionally create divisions between the Central Asian states. The area has already been the site of several ethnic conflicts. With the number of people expected to rise dramatically in the next 25-35 years, the Fergana Valley will likely become a hotbed of tension and conflict in the region.

Meanwhile, Central Asia's cultural makeup will undoubtedly change. The widespread use of Russian as a lingua franca, which is rooted in the Soviet period, will probably decline as new generations with no memory of their countries' Soviet past grow up. Russia will see its influence over the region decline as such cultural bonds — as well as its own capabilities to project economic and military power — weaken. The transition from Soviet-era leaders like Nazarbayev and Rakhmon, who have favored Russia over the West, to new rulers from the post-Soviet generation will make Central Asia a more unpredictable place that is open to contestation — a change that is unlikely to favor Russia.

However, the West will also see its ability to influence Central Asia decline as the regionalization of Europe forces the Continent to focus on matters closer to home. Still, countries in Central and Eastern Europe may seek to import Central Asian energy supplies through the Caspian corridor to diversify away from Russia. Meanwhile, the United States will remain an important player in the region. As in the Caucasus, it will be selective in how it engages in Central Asia, preferring to step in from time to time to keep any single external power from gaining too much influence.

While the reach of Russia and the West recedes over the coming decades, two other powers will rise in their place: Turkey and China. Four of the five states in Central Asia are ethnically Turkic, and as Russia's cultural bonds in the region fade, Turkey's will strengthen. Because Turkey's population is predicted to grow by more than 20 percent, reaching 96 million people, it will have greater economic and military power to match its rising soft power. China, for its part, has already made economic inroads into the region over the past decade, and its economic influence will likely continue to grow. Such growth will be aided by the fact that Russia will not continue to be able to financially support many Central Asian states. That said, China will still have to contend with Turkey, which will be more active in the region. But this contest is unlikely to take on a military dimension; China and Turkey will have more immediate security concerns in East Asia and the Middle East.

Afghanistan will continue to have a significant impact in Central Asia, not as a regional power with influence but as a weak state with the potential to destabilize the region. Cross-border ties between ethnic Tajiks, Uzbeks and Turkmens on either side of the boundary between Afghanistan and Central Asia will grow. This could increase the likelihood of Islamist and militant elements spilling over into the region. Although they will continue to compete at a strategic level, Russia, Turkey, China and the United States will cooperate at a tactical level to prevent the rise of powerful radical Islamist groups in Central Asia. For the foreseeable future, instability and conflict within and between Central Asian states will continue to pose the largest threat to the region, one that will be far more difficult to contain.