Weep Not for Kim Jong Il 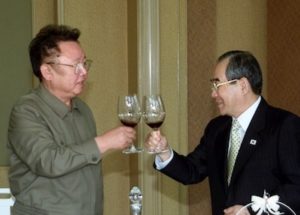 So, it finally happened. Kim Jong Il, the Dear Leader, Marshal of a Mighty Republic and the Lodestar of the 20th Century, is dead. His demise was widely expected — Marshal Kim has not looked healthy in recent years, and in 2008 he suffered a major stroke. But nonetheless his death has sent shockwaves around the world.

For most people outside North Korea, Kim Jong Il has always appeared a bizarre and menacing, if slightly comical, figure. He was fat, had a strange haircut, and was reputed to have worn platform shoes to mask his humble stature. His love for cognac and expensive cheese, as well as other luxuries was widely known (outside North Korea, of course) — and looked especially bizarre for someone who presided over the worst famine in the last few decades. His policies as leader were often explained as irrational, driven by his inflated ego or perhaps ideological jealousy.

There is a kernel of truth to all of this, even though in some regards this popular picture is patently incorrect (the late marshal was anything but irrational). But what is left out is, above all, his masterful ability to survive.

When, in the late 1980s, Kim Jong Il began to gradually assume the top leader position in his impoverished country, few suspected that he would stay control to the end, dying of natural causes as the absolute ruler of his personal realm. Even when compared with other state socialist countries, North Korea appears and appeared to be very inefficient, strange, and plainly irrational.

Yet what has happened to the seemingly "rational" and "far-sighted" communist regimes of Eastern Europe? No doubt, the German Democratic Republic and the People’s Republic of Poland provided their people with a far better standard of living, but did it help their former leaders? The East German strongman Erich Honecker suffered much humiliation and died in exile. Wojciech Jaruzelski, the Polish military ruler, was disposed and then stood trial. The fate of other supposedly "rational" communist leaders of East Europe was not much different.

Meanwhile, Kim Jong Il enjoyed a highly agreeable life until his recent demise. Is this not good enough reason to doubt the alleged irrationality of North Korea’s political and economic policies? These policies did not bring prosperity to the ordinary people of North Korea, of course, but such was never their aim. Instead, they clearly have ensured the survival and success of a tiny hereditary elite, presided over by the Kim family itself. That was always the major goal: to stay in control, to survive against all odds, in highly adverse circumstances.

And in that, Kim Jong Il was a big, fat success. Consider his decision not to emulate Chinese reforms, which brought a disastrous famine in the mid-1990s. The famine killed between 500,000 and 1 million Koreans, but the regime held on to power. Kim Jong Il and his inner circle understood perfectly well that given North Korea’s backwardness, Chinese-style reforms would be tantamount to political suicide.

The major problem was and remains the existence of a rival state — filthy rich and free South Korea, whose population speaks the same language and is considered a part of the same nation. The average North Korean was not aware about this prosperity until recently, but the elite had no illusions: South Korea — or, rather, its unprecedented economic success — constituted a mortal threat to the existence of North Korean regime and survival of its ruling family.

Kim Jong Il understood that relaxation of state control, and the resultant spread of information about the outside world (unavoidable in the case of China-style "reform and openness") would soon destabilize the impoverished North Korean state as North Koreans discovered the truth about their own sorry condition. He understood that in North Korea, reforms would not lead to China-like economic boom, but to East German-style political collapse. He also understood that he and his family would probably perish in such a social disaster. Hence he was determined to prevent it, and he was successful in this.

How did Kim do it? Domestically, he stubbornly avoided any social or economic relaxation and did what he could to maintain the information blockade, to keep commoners ignorant about the outside world.

Admittedly, those efforts were not a complete success. The old Stalinist economy collapsed anyway, so by the late 1990s most North Koreans made their living through black-market activities of various kinds. Social controls were relaxed as well — thanks in part to rampant corruption (officials began to turn a blind eye to all kinds of suspicious activities if this neglect would be rewarded by a bribe). Last but not least, the introduction of the new digital technologies — above all, DVD players — made the information blockade much more difficult to maintain. Today, millions of North Koreans are watching smuggled South Korean videos, and thus learn about South Korean prosperity.

Nonetheless, the government did what it could to keep social changes under control. No doubt, North Koreans are now engaged in private economic activities on a hitherto unknown scale. They can travel across the country without police permits (permits are still theoretically required, but a small bribe usually suffices if there are problems with the paperwork). They seem to be less fearful of the regime, but nonetheless, the zero-tolerance policy in dealing with political dissent has been a cornerstone of Kim Jong Il’s domestic policy. Kim Jong Il made sure that there were no dissidents in the country — that no North Korean would dare to speak ill of the Kim family or the country’s political system.

Internationally, Kim Jong Il was a master of aid-maximizing diplomacy. Like his father, he knew how to exploit the rivalries, idiosyncrasies, and fears of the great powers (whether they be the Chinese, the Soviets, or later the United States). The younger Kim’s major tool was the nuclear program, which made it possible for his tiny country to squeeze a remarkable amount of aid from the international community without giving too much in return. It is clearly a remarkable achievement that for the last 15 years, North Korea has managed to receive annually 800,000 tons of food free of charge, from foreign donor countries. It is even more remarkable that most of this aid has come from the United States, South Korea and Japan — countries that are officially described by the North Korean media as mortal enemies of Pyongyang.

So the Dear Leader is dead. Perhaps his major strategic goal was to die a natural death in the comfort of his palace (or as seems to have happened, his palatial private train). He succeeded in this endeavour, and this was no small achievement, which required much skill, ruthlessness, and intelligence. It also required a great deal of indifference to the suffering of his people. Kim Jong Il, in spite of his strange haircut, possessed all of the above-mentioned qualities.