Why Loose Talk of the U.S. Supporting a Military Coup in Venezuela Is So Dangerous 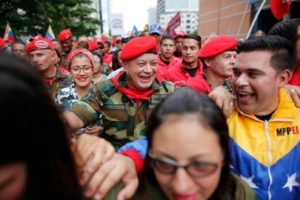 Earlier this month, before leaving for a five-country trip in Latin America, U.S. Secretary of State Rex Tillerson speculated about a potential way out of the economic and political chaos in Venezuela. Perhaps, he suggested, the best solution was a military coup d’état. “In the history of Venezuela and South American countries, it is oftentimes that the military is the agent of change when things are so bad and the leadership can no longer serve the people,” he told an audience at the University of Texas.

President Donald Trump first introduced the notion of prioritizing bullets over ballots in Venezuela last August, when he unexpectedly floated a “possible military option, if necessary” among the range of U.S. policies toward Venezuela. But talk of a U.S. invasion quickly faded. At first, Tillerson’s remark this month also sounded like an offhand observation about a part of the world where, he said, “it’s the military that often handles” political crises.

Now, however, it seems Tillerson’s comments were something of a trial balloon. In the days after his statement, conservative foreign policy analysts began cheerleading for a coup. Then, the most influential senator on Latin American issues, Florida Republican Marco Rubio, championed Tillerson’s idea. “The world would support the Armed Forces in #Venezuela,” Rubio wrote on Twitter, “if they decide to protect the people & restore democracy by removing a dictator.”

It is unclear whether the Trump administration actually hopes for a military coup in Caracas. But its statements send a signal to actors inside the Venezuelan military that Washington wants them to rebel. Before it backfires, this reckless flirtation with Venezuela’s disgruntled soldiers should end immediately.

The White House’s desperation to resolve the crisis in Venezuela is understandable. Venezuelans are suffering from shortages of food and medicine; refugees are flooding into Colombia and Brazil; and President Nicolas Maduro is staging fraudulent elections in April. Yet frustration with the results of diplomatic and economic pressure—and foundering international efforts at mediation between Maduro and the opposition—do not justify the irresponsible endorsement of a military rebellion.

The consequences of a coup in Venezuela would be highly unpredictable, and potentially catastrophic, given the steady rise of the military’s power and its politicization. Under previous President Hugo Chavez, a former army lieutenant colonel and anti-American firebrand, active duty and retired military officials began occupying multiple Cabinet positions. Military promotions rewarded ideological devotion. In 2008, the military even adopted a revolutionary slogan, “Fatherland, socialism or death!”

The military leadership did recognize the opposition’s 2015 victory in legislative elections. But overall, it has acquiesced in Maduro’s increasing authoritarianism, raising no objections as he imprisoned political opponents, neutered the opposition-controlled National Assembly and repressed dissent with such brutality that the International Criminal Court launched a formal investigation.

As a reward for its loyalty, Venezuela’s socialist government bequeathed to the armed forces a range of economic advantages, from key posts at state-owned enterprises to control over cocaine trafficking. Entrenched in power, the military’s venal hierarchy is the linchpin of Maduro’s rule. It is also a black box. The army is deeply isolated, corrupt and politicized. The United States has no relationships, or even minimal contact, with Venezuelan military officials.

Open calls for a coup are unlikely to strengthen voices of Venezuelan dissidents. Rather, they could provide a pretext for purging officials who are quietly working to keep open the options for a democratic transition.

Granted, there is reason to believe that following a coup, the Venezuelan military would not hold power for long. Its interests are more humble: assure impunity for its crimes, retain economic privileges and avoid responsibility for the country’s various troubles, including hyperinflation, a collapsed health care system and declining oil production. After all, if Venezuela’s military wanted formal political power, it would have deposed Maduro long ago.

That said, there is no reason to believe that the best path to restoring democracy in Venezuela is at gunpoint, even if an old-fashioned putsch eventually produced fair elections. Maduro’s political movement enjoys the support of one-fifth of Venezuelans, and his removal would provoke a violent response from loyalists. It would also raise serious questions about the legitimacy of the next government, even if it emerges from a democratic process.

Nor is it clear Rubio is correct that “the world would support” Maduro’s overthrow. Civilian control of the armed forces is arguably the most important gain Latin America has achieved since the Cold War—and democratic leadership is enshrined in regional treaties and a requirement of regional multilateral organizations.

Then there is the potential for disastrous déjà vu. In 2002, the United States cheered a short-lived military uprising in Caracas. After Chavez retook the Miraflores presidential palace, U.S. support for the failed coup became an evergreen propaganda weapon and a lasting stain on Washington’s credibility as a champion of democracy in the Americas. It would be a shame to repeat that error, especially at a moment when the United States has made impressive progress marshaling international pressure on the Venezuelan government, both in Latin America and Europe.

Finally, consider the region’s history of military intervention, from which Tillerson drew exactly the wrong conclusion. The consolidation of democracy in Latin America should not be taken for granted. Just a few decades ago, brutal military dictatorships ruled in Argentina, Chile and Uruguay, while Bolivia, Ecuador and Peru seesawed between democratic and authoritarian rule. Only a few years ago, the armed forces in Honduras arrested the democratically elected president in the middle of the night and flew him to Costa Rica in his pajamas.

In this context, a coup in Venezuela would fail even if it succeeded in toppling Maduro. A military takeover supported by the United States would invite soldiers throughout the region to re-emerge from their barracks anytime they lose confidence in the region’s fledgling civilian institutions.